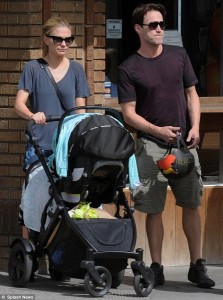 After many months of speculation finally official confirmation of the names of the Moyer-Paquin twin brother and sister. The little ones are called Charlie and Poppy. A strong, classic male name and a lovely flower. Excellent choices, if you’d ask me.

Stephen mentioned the babies’ names at the Tuesday night premiere of True Blood. After mentioning that Lilac, was leaving for sleep-away camp this weekend, he said that he and Anna planned on spending Father’s Day “hanging out with Charlie and Poppy.”

Apparently Anna has a little surprise planned for Father’s Day, but is not giving away anything. “I can’t tell you because that would ruin the surprise,” she laughed before adding, “I don’t know about [it being a] big surprise, but yes, there are plans.”