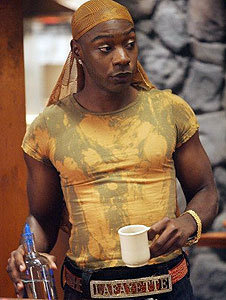 The fans were so happy when in the first episode of Season 2 we found out that Lafayette was still alive and that we would have the pleasure of seeing Nelsan Ellis in the character again and again.  Now we’re on season 3 already and he seems more ingrained in the story than ever.  Some of the changes made by the writers have been indeed welcome and good changes and he is one of them.   Below is an article from the Charlotte Observer that tells us more about Nelsan and the character he plays.

It scarcely seems plausible that an ordinary human could be the most vivid character on HBO’s ghoulish “True Blood,” a show teeming with supernatural, larger-than-death freaks.

Then again, “ordinary” is probably not the best way to describe Lafayette Reynolds, an emphatically gay man in a small Southern town. Brilliantly played by Nelsan Ellis, Lafayette is a redneck-thumping, drug-dealing diva with a tongue saltier than the gumbo he serves up as the grill cook at Merlotte’s honky tonk.

Amid “True Blood’s” menagerie of vampires, shape-shifters and werewolves, Lafayette’s bayou bohemian was the hardest role to cast, according to creator Allan Ball, who adapted the show from Charlaine Harris’ Sookie Stackhouse novels.

“Whenever you have a character in which one of his defining qualities is his sexuality, it’s always challenging,” says Ball via e-mail, “because you don’t want to bring in someone who’s going to play that in a phony way.”

That Ellis has fashioned Lafayette into one of the most incandescent homosexuals in the annals of television is all the more impressive when you learn that the actor is straight. A former Marine, no less.

From Camp Lejeune to Camp Camp. How do you pull that off?

“I think I’ve been in every gay club from New York to California,” says Ellis, 32. “I would be in clubs with my recorders in my pocket, taping people talking. But at the end of the day, I drew more from my (four) sisters and my mother. I’ve been mimicking them my whole life. They’re in my bones.”

The transformation isn’t all interior.

“I have more makeup on than any of the females in the cast,” Ellis says. “Once they get me with the fake eyelashes and the eye makeup, I listen to some Rihanna and I’m there.”

Lafayette had an abbreviated shelf life in the books and wasn’t expected to last long on the TV series, either. But Ellis’ supercharged presence changed all that.

“My contract was for one season as a recurring character,” he says. “All of a sudden, Lafayette was in every episode. After six, Rutina (Wesley, who plays his troubled cousin Tara) started telling me, ‘I don’t think they can get rid of you.'”

Says Ball, “Nelsan’s performance definitely brought him to life in a way that made me realize we could never kill this character the way he dies in the books.”