Nelsan Ellis can finally speak out

The Boston Herald interviewed Nelsan Ellis and asked how it was having to keep the secret of Lafayette’s fate for so long. 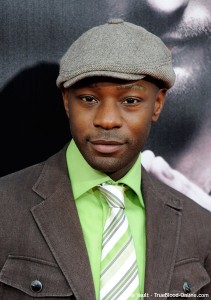 But soon after everyone learned Lafayette lived, a new question arose. Now everyone wants to know if Lafayette, who survived being kidnapped by vampire Eric (Alexander Skarsgard), will be turned into a vampire.

Ellis will only say that for the duration of this season Lafayette works for Eric.

“He’s sort of beholden to Eric, how deeply, that I can’t say. And he goes through post-traumatic stress disorder. It’s not the Lafayette that we know. That was hard. These new circumstances that he’s in calls for a completely different mind-set and attitude and behavior, and I kept going, ‘I want to have some fun.’ But you can’t really when you’re going through post-traumatic stress disorder. He’s not the tough Lafayette. He’s not the sharp-tongued Lafayette. He’s another Lafayette entirely.”

The Juilliard-trained actor also is a playwright and has written plays based on events that have affected his life. While he was attending Juilliard, his sister was murdered by her boyfriend, and he wrote a play about domestic violence that he hopes will be produced for TV. “It’s an epidemic of great proportion,” he said. “People responded to it. It sparked conversation that otherwise might have been taboo.”

Ellis had no idea how popular his character was until a reporter told him toward the end of the first season. “I’m just around, for the most part, my family and friends,” he said. “And my family don’t really dig the show because I have a very conservative Christian family. In my mind, I thought everybody felt like my family and friends.”

He’s still not sure why his character is so well-received. “The majority of people just tell me they have not seen a character like this on TV, and I’m grateful for it because it’s keeping me working.”

He’s put his character completely in the hands of executive producer and creator Alan Ball and has only one request.

“I think his mama should make an appearance, since she apparently has been a big influence negatively on Lafayette. That’s the only thing I would actually say to Alan Ball: ‘Can his mama make an appearance and can she be played by Viola Davis?’ ”