Nelsan Ellis Describes the Loss of His On-Screen Lover 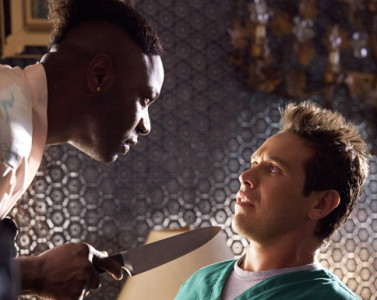 It’s always tough losing one of your good work buddies, but usually nobody makes you force them out at the end of a kitchen knife. Nelsan Ellis, who plays Lafayette on ‘True Blood,’ told the Inside True Blood Blog a bit about how Kevin Alejandro’s spectacular exit in the season finale has affected him – and his character.

“Lafayette is distraught,” Ellis says. “He wasn’t the one who killed Jesus, but it was by his hand. This is possibly Lafayette’s first real meaningful love, and he wasn’t strong enough to protect Jesus – even though Jesus has been able to protect him all season. It was a hard scene for me because I’ve been working with Kevin for two years and we’re best of friends. We’ve done some real intimate stuff … So it was hard really for me to stab him.”