New art work on True Blood made from bicycle parts 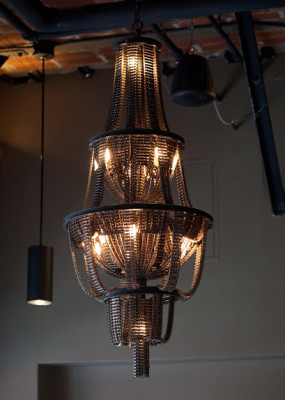 Carolina Fontoura Alzaga has come a long way since Denver. The artist, who’s now based in Los Angeles, goes by FACARO in the art world, where she’s gained international acclaim. And one of her chandeliers made of bicycle parts was just featured in several episodes of the popular vampire series, True Blood.

When we were putting the set together, we knew we wanted an edgy look to this very edgy sexual torture environment,” says Ron V. Franco, set decorator for True Blood. “In looking at the other chandeliers that were available, what set [FACARO’s] apart was that it is edgy but with a bite to it.” The bite pun was unintended but accurate, given the nature of the show: The chandelier was shown in two recent episodes, “Almost Home” and “Love Is to Die.”

“It feels really great,” Alzaga says of her work being featured on True Blood. “It seems really appropriate for me.” She has always seen her chandeliers as art objects, but has worked to make them more functional over time. She plans to work with other lighting sculptures in the future, while still using reclaimed materials.

See the light fixture as it appeared in True Blood Season 7, episodes 7 and 8 below:

Find more information about FACARO and her work at facaro.com.