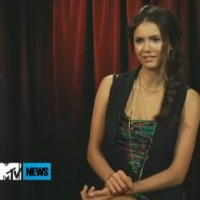 San Diego is about to be taken over by vampires at Comic-Con 2010. Two of the most popular groups of TV bloodsuckers — the casts of “Vampire Diaries” and “True Blood” will be attending the event. In the video below Nina Dobrev of Vampire Diaries talks about how she loves True Blood and admits that her favorite character is Eric Northman, played by Alexander Skarsgård.

With all of these gorgeous faces and their makers (i.e. Kevin Williamson and Alan Ball) in one giant convention hall, we’re desperately hoping it will help help further an idea formed in the MTV Newsroom from Miss Elena Gilbert herself, Nina Dobrev.

You see, even though she is loyal to the people of Mystic falls, Nina admits to being a giant fan of “True Blood.” When asked who her favorite character was on the HBO series, she didn’t hesitate to respond. “Eric!” she exclaimed in reference to hottie mc hottie Alexander Skarsgård. “Because he’s not on ‘The Vampire Diaries’ — I already get to play with those boys on set and as Elena and Katherine — so it would be fun to be on ‘True Blood’ and to be with the bad boy on ‘True Blood.'”

While calling Eric “tall and scary,” Nina then interrupted herself with this brilliant brainstorm: “You know what? I would like to merge [‘Vampire Diaries’ and ‘True Blood’]. I want Katherine and Eric to be together.” In the video above, you can hear the response, “that would be amazing” (because, really, it WOULD BE) and Nina agreed. “That would be fun!”