Written for the Vault by Kellmeister

‘Were Ross and Rachel really on a break?’

‘Who will BE the next American Idol?’

Not since questions like these has there been such a hotbed of discussion and debate around the water cooler, or now, in online boards and chat rooms, about our favorite cult TV show. Now we find ourselves asking another, more pressing question- are you on Team Bill or Team Eric?

Please don’t ask me that question, because as Shad, our delightful Web mistress, put it so kindly to me prior to me writing this, I find myself in a ‘repressed minority.’ I have been completely and utterly glamoured by BOTH phantasmagorically (is this even a word?) hot, un-dead male vamps in True Blood. (I am a self-professed Billsbabe, but we’ll let that slide under the radar for now, won’t we?) They have completely different looks, and completely different personalities, and, as is apparent on the show, completely different backgrounds, despite both having to hide from the sun during the day. Ultimately, though, they also share some of the more, shall we say, unbecoming, characteristics of the vampire- the need to feed on human blood, a smidge of possessiveness, and the bloodlust that comes from the three F’s: fighting, feeding, and, well, you know, fornicating (using the ‘pur-ee-tan-ee-cal’ form of the word, of course).

I have been on several boards and fan fiction sites, watch the show religiously, and am reading the books, and I grow weary of all the bickering back and forth regarding Bill and Eric. It seems to me that everyone, myself included, loves to voice their opinion about one vamp versus the other, and finds it difficult to just agree to disagree. First I hear, ‘Eric is a total jerk, he’s selfish, arrogant, manipulative, boring, he does nothing for me, and is just toying with Bill to get to Sookie, yadda, yadda, yadda.’ Then I hear, ‘Bill is such a jerk, he’s selfish, boring, he does nothing for me, you know what he did in the books- he just deceived Sookie and took advantage of her, you know the Queen’s going to show up this season, yadda, yadda, yadda.’ And that’s putting it mildly. Sometimes I feel like it’s become one of those taboo subjects you don’t talk about in everyday conversation, like politics or religion.

If I’m being painfully honest, I’m trying to write this purely from the television point of view- if you bring the books into this, you’re dealing with a completely different set of circumstances, and you’ve got to get yourself out of that mindset right now if you’re reading my drivel. I’ve heard in various interviews with the cast, that True Blood shouldn’t tell the story the same exact way as the books, and I agree. As Chet Atkins once said, ‘Once you become predictable, no one’s interested anymore.’ Change it up for me, Alan Ball; I’m in for the long haul. 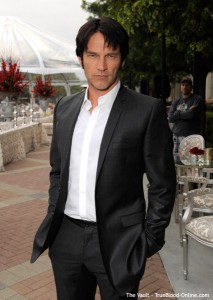 Stephen Moyer is depicting his character of Bill to a tee, as the more humanistic, less auspicious, mainstreaming vamp. We’ve seen glimpses of Bill’s inner monster, both in the past and the present, ever since he was turned just before reuniting with his human family. He has declared his love for Sookie, and tries to remain patient with her, while trying to teach her that the vampire world can’t be fitted to the same moral compass as the human world embraces. We have seen his tortured soul come into play many times, and time will tell if Bill has any ulterior motives behind any of his actions. So far, his intentions seem sincere, and he’s been able to control his animalistic impulses, aside from staking Longshadow, and killing Uncle Bartlett, which were both essentially in defense of Sookie. Bill is protective, tries to play by the so-called rules, and is able to feel remorse. He’s ever the Southern Gent, with a touch of ‘I’m here to kick ass, and take names.’ 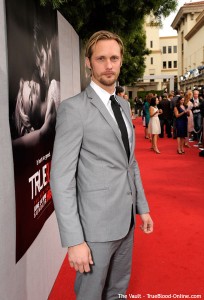 In the same respect, Alexander Skarsgård must be doing a spectacular job of portraying Eric, because so many of you find him detestable, despicable, and downright pretentious- the consummate bad boy. He is that, but that’s all we’ve been allowed to see of him so far. We are also being led to believe that he cares deeply for his maker, and yes, he can shed a tear or two, which has endeared him to the True Blood groupies on the opposite end of the spectrum from Bill lovers. He doesn’t appear to carry any remnants of human emotion around with him; he embraces vampirism. He’s seen all, done all, and goes after what he wants, even if it’s in an underhanded way, or even if it involves chaining victims up in a dungeon for weeks at a time. (I have to say I didn’t enjoy the torture of our pre-PTSD Lafayette, but can you say you really miss the redneck, garlic-toting Royce?) To me, Eric plays a bit of tortured soul, in addition to being a powerful badass. He’s confident, cocky, and a ‘lovable rogue,’ as someone wrote on The Vault a few days ago.

So here we have these two characters, which, for me, are the embodiment of the angel and the devil sitting on my shoulders, both vying for my attention, one trying to lead me away from a moral path and to give in to my ‘id’ at every turn, the other one trying to lead me down the path of the more righteous (albeit slightly tainted by fangs), or the way of my ‘ego.’ Personally, I couldn’t argue with either one of these two whispering in my ear. If we do end up with the so-called ‘love triangle’ that so many are either dreading, or waiting for with bated breath, God help you Sookie. All the territory marking not withstanding (mine, mine, mine), you’ve got yourself one hell of a decision to make, in my opinion. 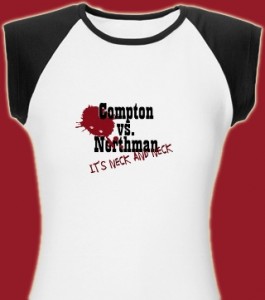 It has been said that one’s perception is one’s reality. Therefore, in my reality, I find both characters handsome, both having certain flaws (hello, potential exsanguination?), and both having character traits that undeniably make them the very unique vampires they are. I understand, and I get it, that some of you don’t find one or the other attractive, honest, too boring, too uptight, whatever. I’ll just continue to try to politely agree to disagree on certain points, knowing you have your opinion, and I have mine. Please try not to make your arguments too personal against the actors, either, because ultimately, these two are simply playing CHARACTERS, created in a talented woman’s imagination, given voices in a book, and now brought to life in a televised version of the story, thanks to Mr. Alan Ball.

As Jason would say, “It is what it is,” and I wish we could all remain so easily enlightened, and simply enjoy the show for entertainment purposes, without a lot of hyped-up overanalyzation.

Just leave my vamps alone. At least they don’t sparkle….

The t-shirt Compton vs Northman it’s neck and neck is available in the Billsbabe’s Shoppe.

© The Vault – TrueBlood-Online.com
Reproduction is not allowed without a source link back to www.trueblood-online.com