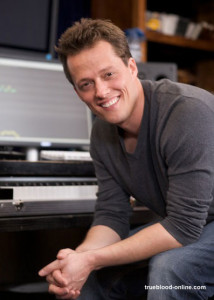 Nathan Barr is one of our favorite composters and The Vault has followed his career since Season 1.  It’s our opionion that True Blood just wouldn’t be the same without his haunting background music. Below is a Q&A from Inside True Blood’s Blog where Gianna Sobel asks Nathan about writing the background music that sets the mood for the show.

As the season premiere nears, Nathan Barr is busy scoring upcoming episodes, getting everything in order for an on-time delivery. I stopped him for a few minutes to talk about his music, his most memorable scenes, and what it’s like being the guy who scores True Blood.

Gianna: You’ve been with True Blood since season one, how did you find yourself composing for this show? What was the hiring process like for you? Did you go after the gig or did Alan come to you?
Nathan: My score to Hostel serendipitously ended up in the cutting room and was temped into the pilot, so when it came time to interview composers, I was on the short list. I met with Alan and several other editors and producers and pitched them my musical take on the show. In a nutshell, since the songs were going to handle the regional Southern feel, the score could steer away from slide guitars, harmonicas, or any other instruments which might have been a bit on the nose. Following the meeting, I believe Alan went away on vacation with a stack of my cd’s and those of one other composer, and upon returning I got the call that I was going to be hired. It was a very exciting day.

Gianna: How has the show changed — at least from your perspective and regarding the work that you do — from season one to now?
Nathan: Since season 1, the amount of score has increased dramatically. I am currently at work on Season 5 and on average there is a solid 10-15 minutes more score per episode than what was required in Season 1. The scope of the story in the show has also blown up quite a bit, and so the score has followed that journey by becoming a bit more grand and orchestral. It still has all the flavor and tone of what was established in season 1, it’s just a bit bigger. This shift began in Season 4 with the massive Faerie sequence which kicked off the season. Ever since, an orchestral palette has been a part of the show. In addition, there are always new and interesting characters who require new themes.

Gianna: What was the hardest scene you’ve had to score and why?
Nathan: Generally at the end of each season there are a couple of intense action sequences. What comes to mind are the Maenad wedding ceremony at the end of season 2, and the “Bill and Eric burned at the stake” sequence at the end of season 4. In addition to being longer cues — sometimes over 10 minutes — these sequences also require a lot of detailed musical work so all the various beats throughout a scene are covered. These scenes are often the most difficult and time consuming.

Gianna: What’s your favorite part about working on this show?
Nathan: My favorite part of working on the show hands down is the people. Everyone I work with in post is so supportive and excited about the show, and this creates an environment that is ripe for creativity. On many shows, there seems to be some sort of a ‘fear factor’ driving things. That element is not at all present on True Blood.

Gianna: Anything you can tell us about the upcoming season? Have you started working already? How’s it going?
Nathan: I am just finishing the third episode in season 5 as I write this and it’s going wonderfully. I just finished writing the theme for Salome, which takes the score into new territory. Every season has a new set of surprises and challenges from a musical standpoint and that keeps the whole process very fresh and exciting.