After reading so much about Evan Rachel Ward recently, I thought it would be interesting to dissect what we know about Queen of Louisiana, Sophie-Anne  Leclerq overall before we learn about how Alan Ball will treat her in the series, True Blood.

First off, we know little about how she will be portrayed in the series.

What we know so far about her in the SERIES

The casting call for True Blood described Queen Sophie-Anne as an almost five hundred year old vampire. She is charming, wily, ruthless and wise. With one foot in the old world and one in the new, she rules all vampires in the state of Louisiana, and engages with Kings and Queens from other states. Brilliant and far-sighted, she is a consummate diplomat, politician and adversary. Incredibly cultured, has known many of history’s most famous people personally — as well as had affairs with many of them — she is entertaining, funny, dangerous and delightful.

Wood revealed in a recent interview with The Daily News that “Sophie-Anne has a female human partner who will play a large part in the series, and that Sophie-Anne possesses one particularly interesting capability that may connect her to another main character”. “She can communicate telepathically with other vampires,” Evan Rachel Wood teased. “That’s something that was in the books. I don’t know how much they’re really going to explore it on the show, but that might lead to a connection with Sookie.”

Wood told EOnline.com. “Her human partner is a girl, but I’m pretty sure she goes both ways. I think vampires are like that in general.” Wood promises that Queen Sophie-Anne’s love life will be unpredictable.

What we know about her in the BOOKS 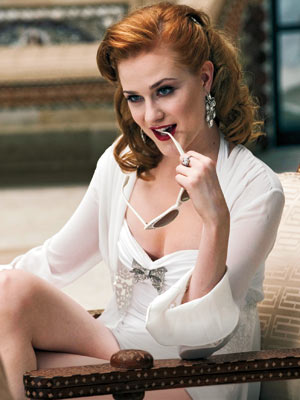 The first time we see Sophie-Anne is not in the books, but a  short story ‘One Word Answer’, by Charlaine Harris, when Sophie-Anne comes to Sookie’s house to tell her that her cousin Hadley has died.  We then, “officially” meet her when Sookie describes Sophie-Anne in book 6 of the Sookie Stackhouse Mysteries, Definitely Dead, as beautiful and pale as milk, with reddish brown hair, large and tilted brown eyes. Sophie-Anne is also portrayed as an elegant woman, around five foot two, always groomed down to the last eyelash. “Makeup, dress, hair, stockings, jewelry-the whole nine yards”.

According to Wikepedia, Sophie-Anne is portrayed in the books as an 1100 year old vampire, (although some say 500-600 years old) , who died in her early teens. She is originally from northern France (Lotharingia) and was the daughter of the wealthiest man in town. Her name then was Judith. When she was about ten or twelve, a peddler came to her village carrying what Sophie-Anne now believes to be a form of influenza. Within two weeks of his visit the town was wiped out except for her and an older boy named Clovis. Though she’s forgotten why, the boy did not like her. He raped Sophie-Anne and took her to the next town, where he offered her for money and food. They were camped out in the woods when a very hungry vampire attacked Clovis, most likely because he was bigger, and then decided that Sophie-Anne would make a good companion. His name was Alain, and they traveled together for around three years. Alain kept promising Sophie-Anne that he would bring her over – she wanted the strength – but he would do the same thing Clovis had, selling her for money. One night they came to a village where the head-man knew what Alain really was – Alain had forgotten that he killed the man’s wife while passing through. The villagers bound him with silver and left him in a hut to keep him until the priest returned from a trip. They did not tie Sophie-Anne up for they knew that she was human and that Alain had abused her. The head-man’s family wanted to take her as a slave. She sneaked into the hut and told Alain that she would free him when he changed her. After some bargaining, he agreed. She dug a hole big enough for her body in the dirt floor. They planned that Alain would drain her and bury her under that pallet that he lay on, smoothing the dirt floor as best he could. On the third night, she would rise, break his chains, and they would flee in the darkness. But the priest returned before the three days were up. By the time Sophie-Anne dug herself out, Alain was dead. The hut the villagers stored Alain in was the priest’s, and he was the one who told Sophie-Anne what had happened. She told him that she was the angel of death and that she was passing him over for being so virtuous. After a few years, she discovered an orphan, like her, roaming in the woods, like her, being forced, like her. That orphan was Andre, and they’ve been together ever since. Andre becomes Sophie-Anne’s personal bodyguard, companion, and, at a time, lover. She has also made Sigebert and Wybert (Saxon warriors) vampire and they are also Sophie-Anne’s bodyguards. She has a special ability, a gift, in which she can talk to her “children” telepathically. She says she can keep her children with her, talking to and loving each other physically. This differs from normal “maker”/”child” relationships which start out as companions or lovers but do not last long (in vampire standards). Usually, the child will leave the maker, and must only come again when he/she is called upon by the maker.

When we meet up with her in the books, Sophie-Anne is the vampire queen of Louisiana. She is New Orleans’s most famous and visible vampire and she has been brave, strategic, and busy in her career as a vampire leader. Sophie Anne sends Bill Compton back to his hometown of Bon Temps to find and seduce, if necessary, Sookie Stackhouse because Sookie’s telepathic ability might be valuable.

In the sixth book, Definitely Dead, Sookie learns that Sophie-Anne turned Sookie’s cousin, Hadley, into a vampire and had a romantic relationship with her. Unfortunately, the queen had to end their relationship due to the queen’s business commitment to Peter Threadgill, vampire king of Arkansas. They had previously agreed to marry each other. In this same book her political marriage to Peter Threadgill ends (he is killed), thus making her queen of Arkansas. In the seventh book, All Together Dead, Hurricane Katrina damaged her New Orleans headquarters as well as her entertainment estate. Also in this novel, the queen is tried in the vampire summit for her husband’s death. Jennifer Cater, Peter’s second in command, brings a lawsuit against Sophie-Anne for murdering him, but the queen is found innocent. Unfortunately, a bomb explosion in the hotel where the summit was held left her severely injured and she eventually loses her legs. Sophie-Anne is killed in the take over by the Nevada king, Felipe de Castro in the eighth book of the series, From Dead to Worse.