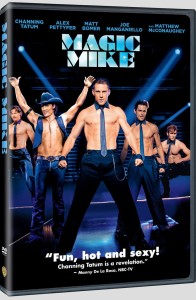 This week, Joe Manganiello’s film, Magic Mike comes out on video and Warner Brothers was nice enough to send us a copy to review.  Guest writer, “Babs by the Beach,” has watched the film and gives her review below.

Magic Mike “is a window into a world that you have never seen.” Over hot dogs, yes, hot dogs, Channing Tatum and Steven Soderbergh agreed to make MM about Tatum’s 19 year-old experience as a stripper and apparently never looked back. I’m actually glad they didn’t because there are many stories buried in Tatum’s ”world”that need to be told.

Tatum’s life as a stripper is truly amazing, because a guy that is 6’1”, literally defies gravity as he makes his body move in ways that, well ladies, you’ll just have to buy the DVD to believe. Sure he moves and grooves in “Step Up,” but frankly, the boy had his clothes on; and you just can’t truly appreciate Tatum covered up with all that baggy fabric. The same goes for all the boys in MM. Matthew McConaughey’s Dallas is not only the carnival barker, MC, ring master, and almost-pimp, but he’s got some serious moves as well, so much so that the ladies in the audience (mind you these are women being paid to be the audience) take method acting to a new level when they liberated Mr. McConaughey of his rather skimpy thong. (Sigh)

Focus, focus, ladies, there are more tales to be told.

As we learn that Mike attempts to diversify his employment portfolio, you can only strip for so long, he’s also a good soul who tries to help along a down-and-out failed college football stud, Alex Pettyfer, Adam “The Kid.” And thank goodness he does, because, while it’s not quite Butch Cassidy and the Sundance Kid, it is a buddy film that shows how the fast life can also make for a faster fall. Mike and Adam begin running together in South Miami the only way two young and overly attractive men can: booze, drugs and sex, and more booze, drugs and sex. 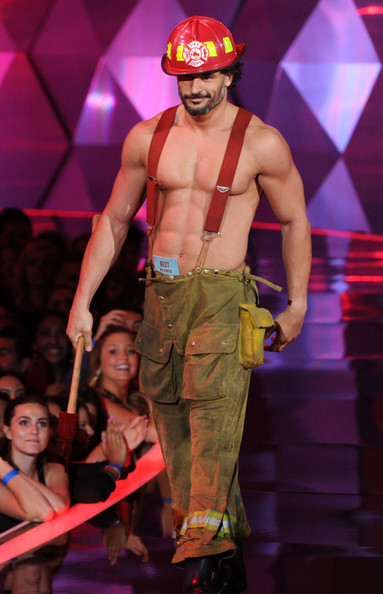 There is the attempt at a love connection between Mike (Tatum) and Alex’s sister Brooke (played by Cody Horn), that somewhat gives the story line depth, but it also somewhat gets in the way of the real fun, the real emotions, the real deal crux-of-this-whale-tale: male bonding. It’s not that women should not be in the film, but as Joe Manganiello says in the DVD Backstage on Magic Mike, “it’s the dance scenes that steal the movie.” It’s the way the guys move on stage as a team that makes it more than eye candy, you can tell they are having fun. There is so much acting potential wasted as just eye candy. These boys have their acting chops: Big Dick Richie (Manganiello–True Blood), Ken (Matt Bomer–White Collar), Tito (Adam Rodriguez–CSI: Miami), and Tarzan (Kevin Nash–The Punisher), but in most scenes they have only a few lines and fill in the background. The energy that Dallas (McConaughey) stirs up, and the guys feed off of, electrifies the movie. But all of this gets shut down as Mike chase Brooke.

This is why, in MM II, IMHO, I hope that not only the dance scenes take center stage, but Fireman Big Dick Richie lights my fire (which is why we need more Joe), Ken pops out of his box more, Tarzan swings into our hearts and Tito makes those legs spin faster than a top. Manganiello nails it again, when he says, “there’s a real sense of camaraderie and I think the dance moves are what brought that all together.” That’s what I want to see more camaraderie (and of course, more dancing).

Written by Babs by the Beach