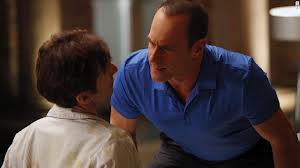 Were any of you surprised when Chris Meloni was killed off so quickly in Season 5 of True Blood?  I sure was.  It seemed that they had just introduced his character and before we really got to know him, the vampire he played, Roman Zimojic was gone.

Rolling Stone magazine thinks it was an important scene and also shocking since they have voted it the 10th of “10 Most Shocking TV Deaths of 2012.”

Here’s some of what they say about it:

Roman’s storyline came to a screeching halt after just five episodes at the hands of the diabolical Russell Edgington (Denis O’Hare) – proving once again that no character, however powerful, is safe on this show. This rule of thumb re-emerged at the season’s end, when we bade a blood-teared adieu to Russell himself (staked by Eric Northman, settling a 1,000-year grudge), and when, after downing a vial of vampire goddess Lilith’s blood, Bill Compton was reborn an indeterminate hybrid the interwebs have unofficially dubbed “Billith.”