Rutina Wesley Chats with W and Reveals Her Morning Routine 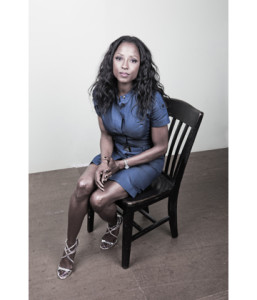 Rutina Wesley chats with W about racial slurs, being duct-taped to a toilet and her future on “True Blood.”

You trained at Julliard and the Royal Academy of Dramatic Art. Did you originally have a theater career in mind before “True Blood” came along?
I wanted to do it all. I think every actor’s dream is to be a working actor, whatever that means. For me, that doesn’t mean the fame and fortune of it all; it just means putting food on the table and telling good stories and working consistently. It’s tough because you can get caught up in the Hollywoodness and fame of it all. I don’t consider myself a celebrity. I’m like, Hey, I’m still Rutina Wesley, from Las Vegas, I’m happily married and I’m very happy to be working, thank you whoever is watching my movies. And I’m very lucky to be with Jeff Talbott and this incredible cast.

It is a pretty amazing ensemble. And I love being the only girl, which is kind of a bonus.

It is an intense play, though. There’s that one scene where Jonathan Groff’s Danny screams the N-word at you. What is it like to have to go through that every night?

I also say the F-word to Jonathan… I feel like that word always makes a hush come over the crowd. We have to really mean it when we say these things to each other and we have to not be afraid to go there and look each other in the eye and say it. And mean it. It’s tough, but I’ll tell you what makes it easy: I adore Jonathan Groff. And I think he adores me. And I say that because every night we give each other a big ol’ hug and we’re like “Love you.” We don’t enjoy saying this to each other seven times a week. At all. We love the play, but every time I’m like, Man, you were givin’ it to me tonight. 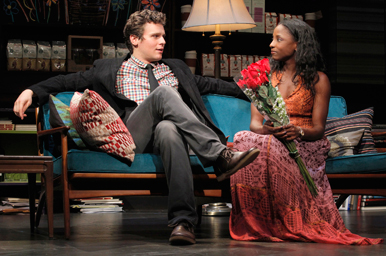 Jonathan Groff and Rutina Wesley in “The Submission”

There was also a scene in the third season of “True Blood” that got a lot of attention, you were duct-taped to a toilet and spoke afterwards about how vulnerable that made you feel. How does this compare to that?

They’re both hard in their own ways. I think they’re both degrading, but I think in a play like this, seven shows a week, it’s a lot harder. Because I’m doing it every day. Whereas that was just a day’s worth of shooting. We may do more than one take, but once it’s done, it’s done, it’s in the can. But I have to go through this every night.

Read the rest of this interview by going to: wmagazine.com.

Below is Rutina’s morning routine as per AM New York:

Q: How are you woken up in the morning, and how would you like to be woken up?
A: I wake up to my alarm clock, but I would rather wake up naturally.

Q: What’s the first thought you have when you wake up in the morning?
A: “Ahhh, another day. I’m alive and healthy.”

Q: What is the first thing you do when you get out of bed?
A: Bathroom break.

Q: For a vampire visiting New York, how do you think they’d start their “day”?
A: With a nice drink of New Yorker blood.