Sam Trammell spoke with TVLine about shifting into Luna, being directed by Stephen Moyer and the upcoming season finale. 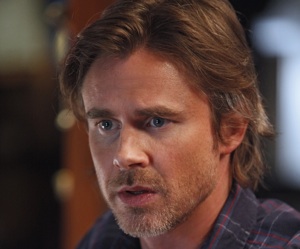 TVLINE | There was also more humor than we’re used to where Sam is concerned.
When I read it, I really saw it as being kind of humorous, but we always wanted to play it straight. The stakes were pretty high for Sam and for Luna, so we tried to shy away from playing the humor… The whole situation is so insane that I’m sure it’s pretty funny. [Laughs] There were definitely different peaks and valleys [in the episode]. The very end, sort of when Luna is dying, that was a serious scene. But then they added the thing where I almost kissed myself, so that was quirky. I think that’s one of the things that the show does well; it kind of bridges different genres.

TVLINE | Did you approach this as playing a feminine version of Sam or as Luna as Sam?
It is kind of a mix. I always want to do it as the person, and Janina is obviously a woman so she has a certain kind of walk. I definitely tried to do a little bit of that. But the way she plays Luna is not overtly feminine… I tried to get the rhythm of her speech. She helped me out. I actually worked with her and watched her read scenes, which was really helpful. But it was really tricky. When I had scenes with myself, particularly in the scene where she comes in after Sam turned into a snake, we shot so many different angles and I kept switching from me to her and then her to me… It was back and forth for 10 hours! I had to go back and forth in the scene and know how each person would play it and also react to that person saying those things… Also, just getting into character — being Sam Merlotte and then being Janina in my body — was really exhausting! [Laughs]

TVLINE | And, of course, we have to talk about your co-star Stephen Moyer directing this episode — particularly given some of the things you were tasked with during the hour.
It was so fun. We’re all friends and Stephen is such an easygoing guy. He was so well prepared — you would never have known it was his first time directing the show because he was so at ease. He knew what he wanted, and that’s half the job right there. So, it was great. We kind of figured it would be like that. He has a really good rapport with the crew, and we had some laughs and had a good time. He was really supportive. I just knew it was going to be a hardcore episode for me, but I love it. I love doing that stuff.

TVLINE | Given the way the episode ended, it’s safe to assume Luna is on death’s door. But what else can you tease about what’s ahead in the coming weeks?
There is the issue of who is shooting shapeshifters with wooden bullets. Sam has definitely been set on a path and part of my storyline will be dealing with that. The next episode is just ridiculous. Some crazy stuff happens and you will continue to be surprised. There’s some more insane stuff happening.

TVLINE | We’re also hearing a very bloody finale awaits us. Care to add anything to that?
I think we have one of the best season finales we’ve ever had. For sure. There’s definitely going to be a ton of blood spilled and a lot of people die. The very end [of the episode], people are going to be like, “Holy s–t!” It’s a major, major cliffhanger.