A True Blood script of the first episode of the first season titled, “Strange Love,” has kindly been donated by Kristin Bauer van Straten and is not available for bidding on Charity Buzz. The script is signed by members of the cast including: Anna Paquin, Alexander Skarsgård, Kristin Bauer, Rustina Wesley and Steven Moyer, Joe Manganello, Chris Bauer, Deborah Ann Woll, Carrie Preston and Jim Parrack. 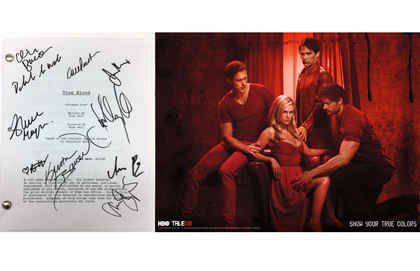 The proceeds for this item benefit Christie’s Green Auction: A Bid to Save the Earth. Learn more about this auction by going to: charitybuzz.com.

The Green Auction is a borderless collaboration of individuals, organizations, and businesses who are engaged, in spirit and action, in the protection and conservation of the environment. Initiated in 2010 by Christie’s, the star-studded affair is expected to raise significant proceeds for four of the world’s leading environmental nonprofits – Oceana, Conservation International (CI), Central Park Conservancy (CPC), and Natural Resources Defense Council (NRDC) – specifically to benefit water-conservation projects central to each organization.

Read more about it by going to: looktothestars.org