Almost five seasons ago each of us sat in front of our screens poised and ready for the first installment of HBO’s True Blood to air.  Undeniably, the first season moved us all rhythmically and almost spiritually into the crevices of Bon Temps.  The southern accent, the southern charm all entities that became engrained into our fanatical soul and then there was this deep embedded desire that smoldered and burned after each and every episode…the desire to wear everything Pam owned! The person responsible for our obsessive cravings for Pam’s clothes and a bar tenders uniform (I know y’all love that tight white shirt with the Merlotte’s logo on it!) belongs to the brilliant creative costume designer Audrey Fisher.

Audrey has been so incredibly gracious with her time in that she has offered a little background info on some of the creative designs on offer in season five, Exciting! 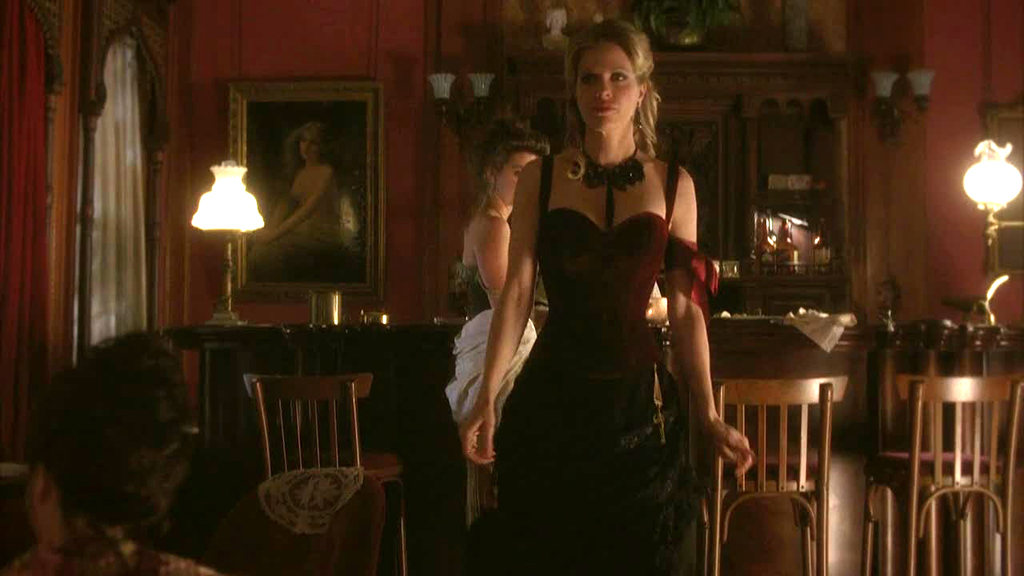 Sitting at the bar eating crab and offering one of her ladies a boost of confidence a flashback of  Pam whereby we see her as the owner of a 1900s brothel, a business woman, a human.

“Kristin Bauer Van Straten and I have the best time putting together her costumes. These turn-of-the-century looks are especially dramatic on her because her figure is perfect for that wasp-waisted look, stunning!

For her first costume in the whore house, I referenced period paintings by John Singer Sargeant for some specific details, like the luscious wide burgundy ribbon tied on her arm in the first scene where she finds the dead girl. We made the first burgundy velvet corset, and found the skirt in a rental house, and added a lot of detail to it. The second costume was a rental that we did a lot cosmetic alteration on to make it suit Pam. The trick was to make her look incredible, wearing the brassiest and most alluring fashion, as a Madame in that era would have, but give her a tinge of sadness and vulnerability.”-  Audrey Fisher 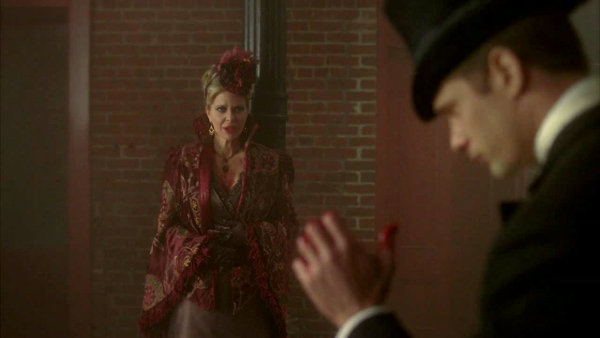 A cold dark night is no night for a lady to be out on the streets on her own.  Pam’s first encounter with Vampire Eric coming to her rescue after being attacked is one that she will never forget.

“The costume she’s wearing when Eric saves Pam’s life was a total build, in doubles because of the blood; we never know how much there will be so we have to be ready to reset to clean. I found that embroidered fabric at a local fabric store, and then based the pattern on a vintage jacket of the period that we found in a costume house. There was just enough to make the capelets we needed. I made her little hat myself sitting on the floor of the fitting room one night; the gloves are custom as well.” – Audrey Fisher 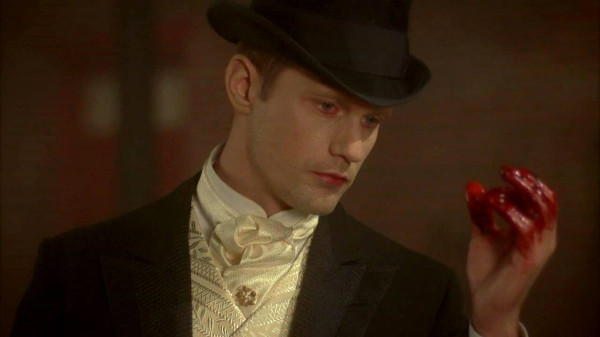 A moment in time, how long have we waited to see a flash back of Pam? This scene was amazing and pivotal to the relationship between ‘Maker’ and ‘Progeny’ An exquisite, refined Eric saving the beautiful Pam on the streets of  nineteen hundred America and such a graphic first encounter that allows Eric to examine the toughness of Pam’s inner fire.

“For his first 1905 look, Alan Ball wanted Eric to look like a wealthy gentleman who had just come from the opera: top hat, frock coat, etc. Not scary, totally refined. Because of time and budgetary issues, we had to scour the costume houses to find a rental frock coat…but we refurbished it with new lapels, buttons, and cuffs, plus did major alterations. We made the incredible top hat (courtesy of Albertus Swanepoel, a dear friend who’s an incredible milliner) and Costume Coop made that dreamy, creamy double breasted vest…I love the juxtaposition of Eric’s bloody hand with the pristine vanilla of the cravat and vest.  We had to have multiples because of the blood in the scene.”- Audrey Fisher 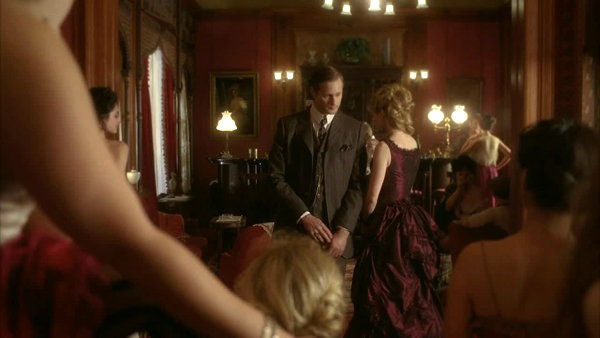 Aroused by their first encounter Vampire Eric calls on Pam and her services.

“Then, because we had more lead time, Costume Coop built Eric’s gorgeous chocolate brown pinstripe 3 piece suit for the bordello scene. I found the perfect wool, but used it on the wrong side for a little more of a period texture and feel. We made the shirt and the cravat with matching pocket square in house. Our propmaster furnished the exquisite watch chain, fob and pocket watch. Vampire Eric as perfect gentleman”- Audrey Fisher 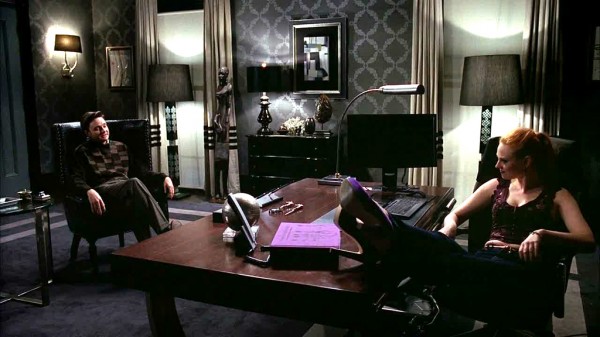 Steve Newlin is hell bent on having Jason Stackhouse as his own and is willing to pay Jessica for exclusive rights to such an ownership.  Jessica is not so easily detoured or in need of the cash. 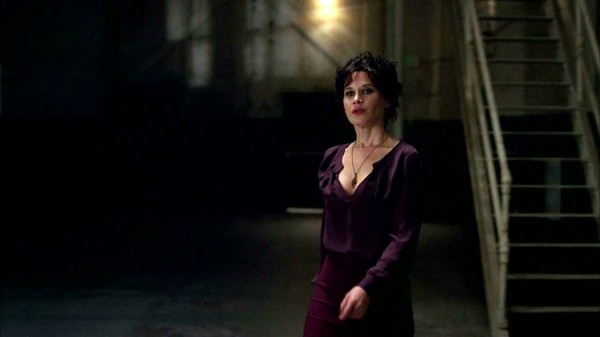 Counselor Salome is about to address the three captives; Eric, Bill and Nora.  Nora is a member of the Authority and treason will not be tolerated by the Authority it will invoke the True Death but for now Salome is content with a few slaps to Nora’s face.

“For her first appearance, I didn’t want to give away all of Salome’s power; it had to be subtle. So we went with a warm burgundy silk blouse by Joie, and a sexy tight skirt by BCBG. The Lilith symbol glints at her neck, showing nicely with the plunging neckline. The point was to cloak her power in her femininity, in true femme fatale style.” – Audrey Fisher 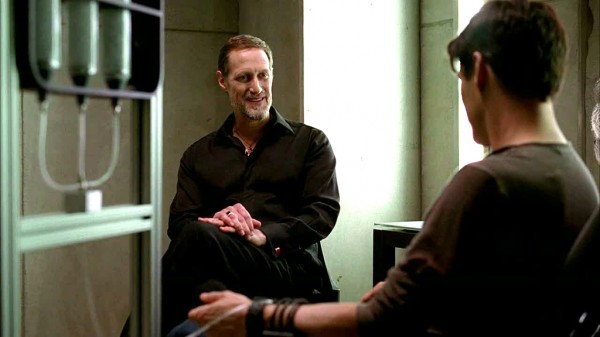 Dieter Braun is assigned to interrogate King Bill for treason.  The intravenous drip is laced with silver and King Bill is ready to tell all but it may not be the truth the Authority wants to hear.

“I’m a huge fan of Christopher Heyerdahl. I find his acting electrifying. Dieter was originally conceptualized with Alan Ball as a sort of mafia hit man, a little edgier and more street-wise than the other Chancellors. A real killer. But we also had an alternate concept of Dieter as a sort of as a haute German businessman, fiercely stylish and a little bit prissy, with an arch and superior intellect, sort of a vampire Karl Lagerfeld. When Christopher walked in the door, it was clear he could carry both of those elements, so we married those two concepts, and Dieter’s look was born.” – Audrey Fisher