It can’t be said to often: the True Blood set designs by Suzuki Ingerslev are exquisite. Ingerslev and set decorator Ron V. Franco created several new sets this season for the Authority headquarters. To the LA Times they explained their decoration choices for the various sets.

Question: How did you come up with the look of the Authority HQ?

Ingerslev: The structure acts as an office building and prison, as well as a residence for some of the more powerful vampire officials, and I thought it should be austere and ancient. The exterior is an existing power station in Glendale. For the main chamber interior, I based the brick walls on a cistern in Turkey and intended for them to have been directly excavated and brought over to New Orleans when Authority vampires were originally establishing their headquarters. The floor plan of the main chamber pays tribute to the layout of a cathedral, conveying a sense of power and history.

Who is supposed to have decorated the spaces?

Ingerslev: The idea is that a professional vampire decorator was hired to ensure secrecy. In reality, our decorator, Ron Franco, chose the furniture, combining a modern sensibility with historic architecture.

Franco: The architecture in the Authority provides such an organic feel that it was necessary to create contrast, decorating with furnishings that were more linear, vampire-like and inviting. 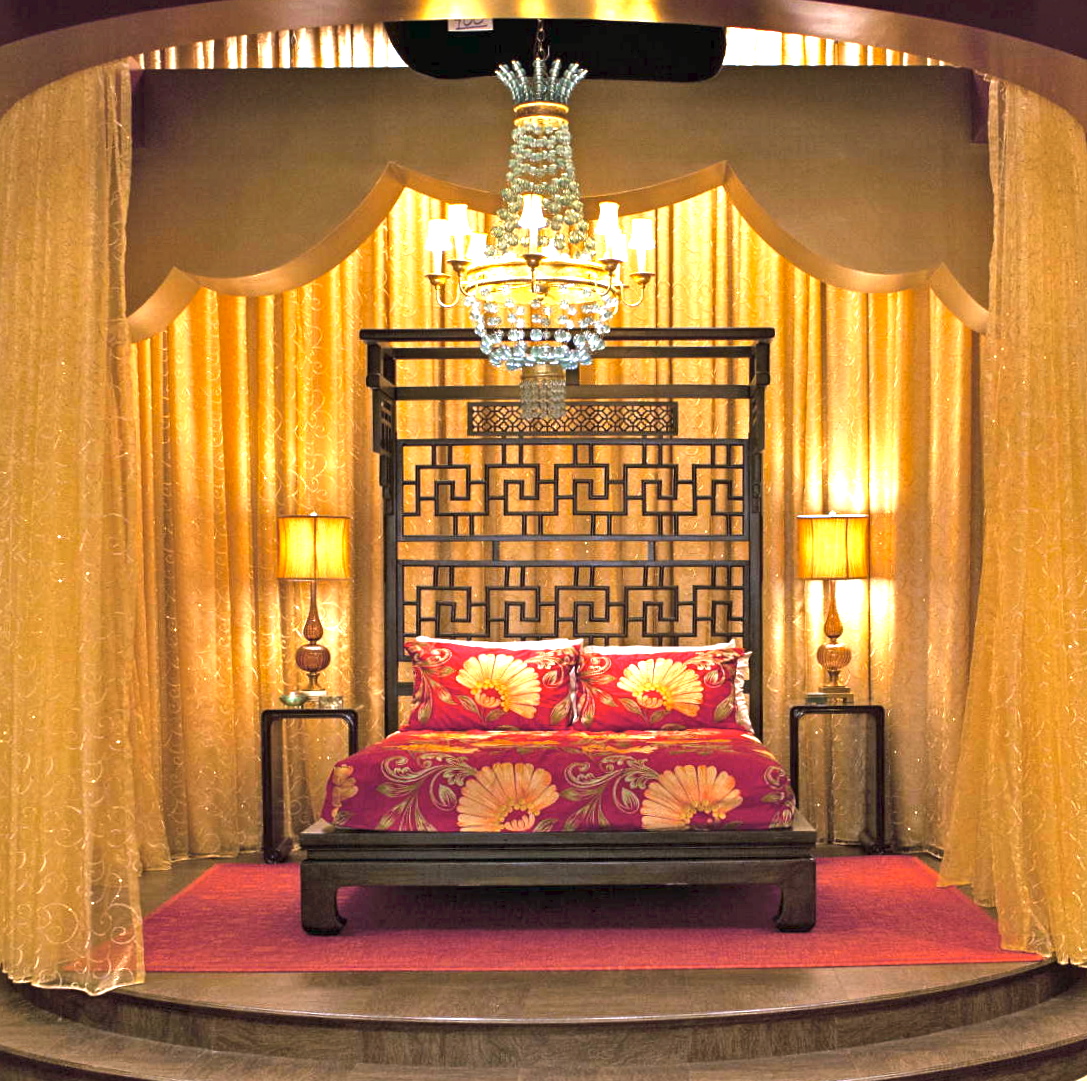 By contrast, Salome’s room looks like a 1930s movie set.

Ingerslev: The set is designed in the same vein as the old Hollywood sets, very stylized and with minimal décor. The whole room revolves around the raised platform bed, placed front and center.

Elevating the bed is a great way to make it  a focal point. Shall I presume Salome is going to use it for more than just sleeping?

Ingerslev: We were for a set that would be intimate and highly sexual. The purpose of the bedchamber was to visually portray her historical role as the supreme femme-fatale. I wanted the audience to feel her magnetism and power through the stylized combination of sophisticated colors.

Franco: The opium bed from Tara Design was complemented by a bold colored silk patterned bedspread and shams from Deco Home and a red rug from the Rug Warehouse as well as gold glass lamps and a turquoise glass embellished chandelier from Grace Home.

Ingerslev: Considering who Salome is, I didn’t want the space to be overt, so I quickly discarded the more obvious idea of doing the room in a harem style. I turned instead to a mixture of chinoiserie and Art Deco, two of my favorite influences. The combination turned out to be exotic, historical and commanding. The addition of the gold embroidered organza drapery from American Home Design around her bed was a nod to Salome’s famous Dance of the Seven Veils.

What was the starting point for Salome’s room?

Ingerslev: Finding an inspirational wallpaper can help set the tone of a room and create a relatively inexpensive focal point that can help you choose colors and the style of furniture. We used Schumacher Silk Road Sojourn in the Chiang Mai Dragon pattern, which we featured as mural panels set in Art Deco frames. It is used sparingly but informed all our color choices and makes a huge impact. The rest of the walls are covered in a subdued gold pattern from Astek that doesn’t compete but actually ties the room together.

You have a lot of color and pattern going on. Was it hard to handle?

Ingerslev: I admit the bold choice of colors did make me nervous at first. I found it quite tricky balancing the mix of strong colors and was concerned it would end up looking like a cartoon, but my instinct was that it would illustrate the complex nature of the character and separate her from the corporate atmosphere of the Authority. The furniture was carefully chosen by Ron and deliberately kept simple. We didn’t want to clutter the room with furnishings that would compete with the intricate walls or make the audience dizzy. Also, I figured vampires wouldn’t be sentimental or keep  mementos from their long pasts.

Franco: I am hoping that our viewers will observe the use of traditional and contemporary elements. It is important to decorate with elements they may already have and be bold enough to mix with more contemporary decor to achieve a more current look. In this set, for instance, we used a traditional rug to anchor the room but also brought in two very modern rugs, one of which (above) is an old rug that had been bleached and overdyed. The lighting elements are modern versions of very traditional designs. 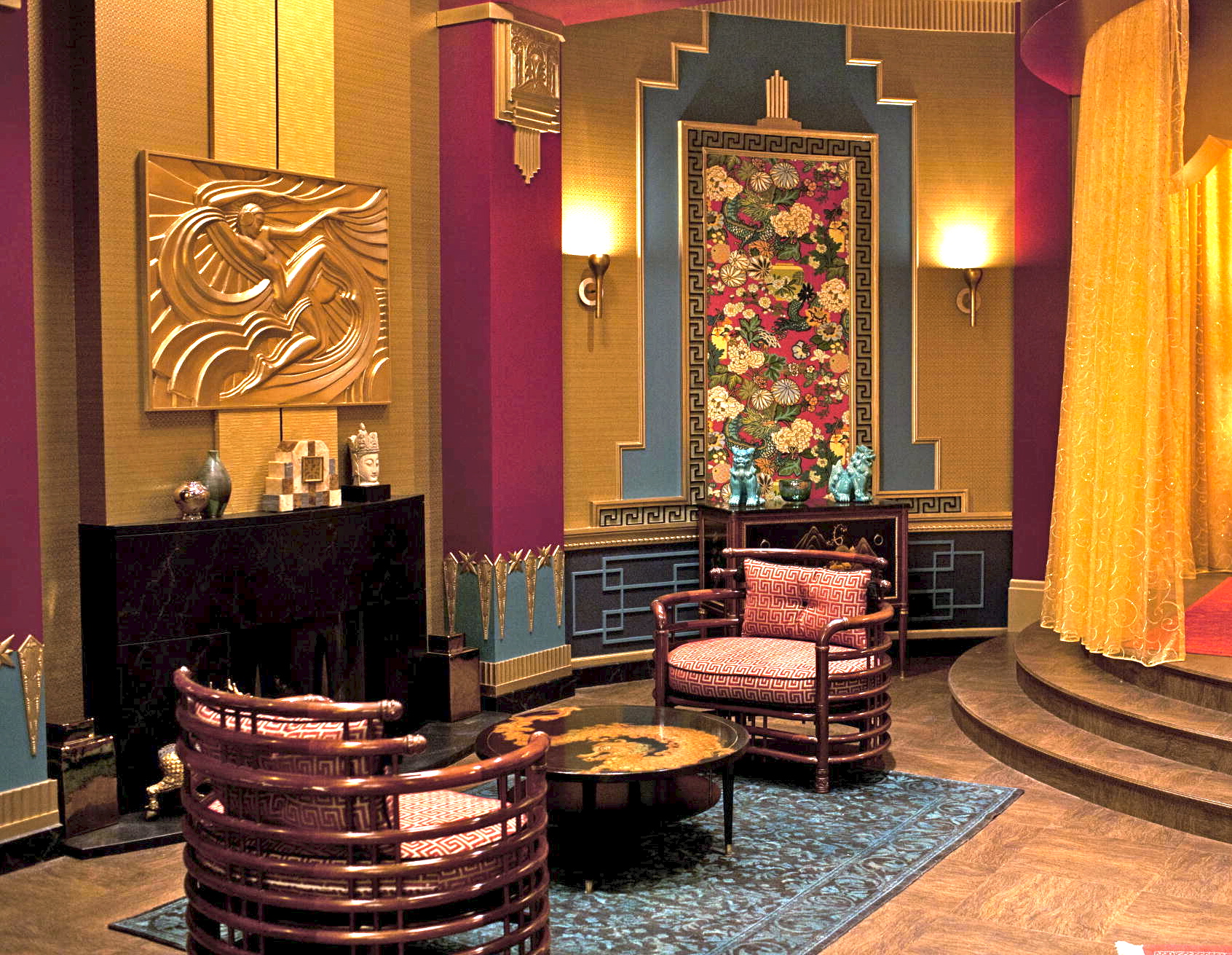 The authority boardroom is strikingly contemporary despite the seemingly ancient setting. What design lessons can viewers pick up from that?

Ingerslev:  Find beauty in simplicity and keep things streamlined, as we did with the light fixtures. Using architecture as a dominating influence, it’s important to keep lines clean and colors monochromatic, but you can have a pop of color like we do with the electric blue upholstery, which is Kvadrat Divina No. 782 from Maharam.

Franco: The lines and textures of the furniture provide a very simple and minimalist framework and do not compete with the antiquated building. We used Yves Behar’s Sayl chair for Herman Miller around the conference table, and lacquer and chrome tables and leather chairs from H.D. Buttercup. Leather, chrome and glass were also chosen to assist with cleaning of the remnants of human and vampire carnage, which makes life much easier for the Authority cleaning crew. 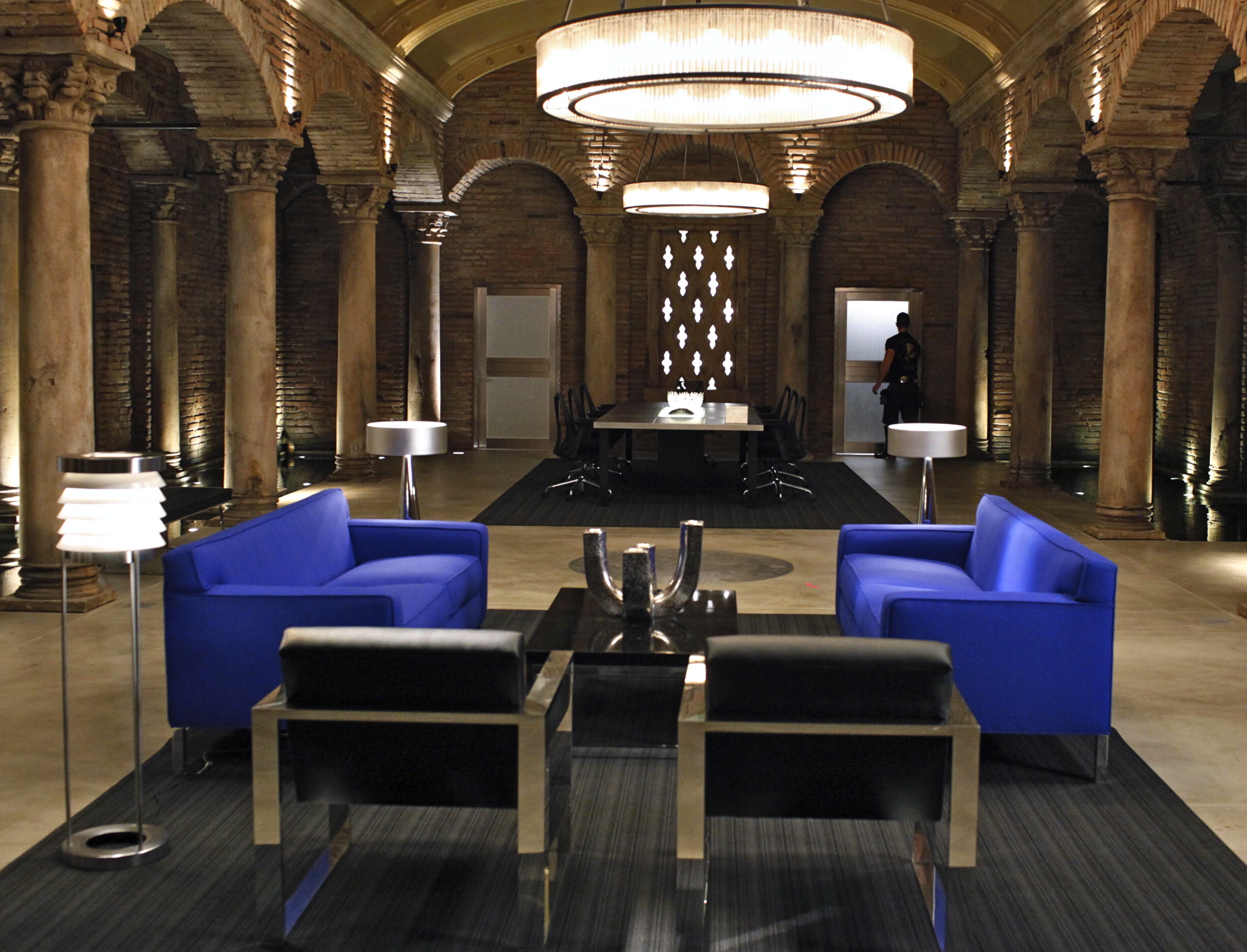 Production designer Suzuki Ingerslev wanted to create a look of old Hollywood glamour for Salome’s bedroom. The Art Deco frieze above the mantle is based on a famous plaque at the entrance to the Folles Bergere building in Paris; it depicts the Russian dancer Nikolska. “It had the right screen-siren style, ” says Ingerslev. 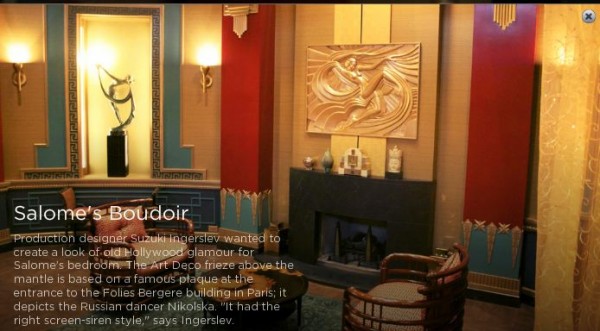