Sookie Breaks the True Blood Love Triangle. Will she ever find love again?

After breaking the love triangle, Sookie finds herself single. Will she ever find love again?

In season four Sookie ended her relationship with Eric and made it clear to Bill that they wouldn’t be getting back together. Whether you’re team Eric, which I am or team Bill it’s safe to say we all were disappointed by her decision. 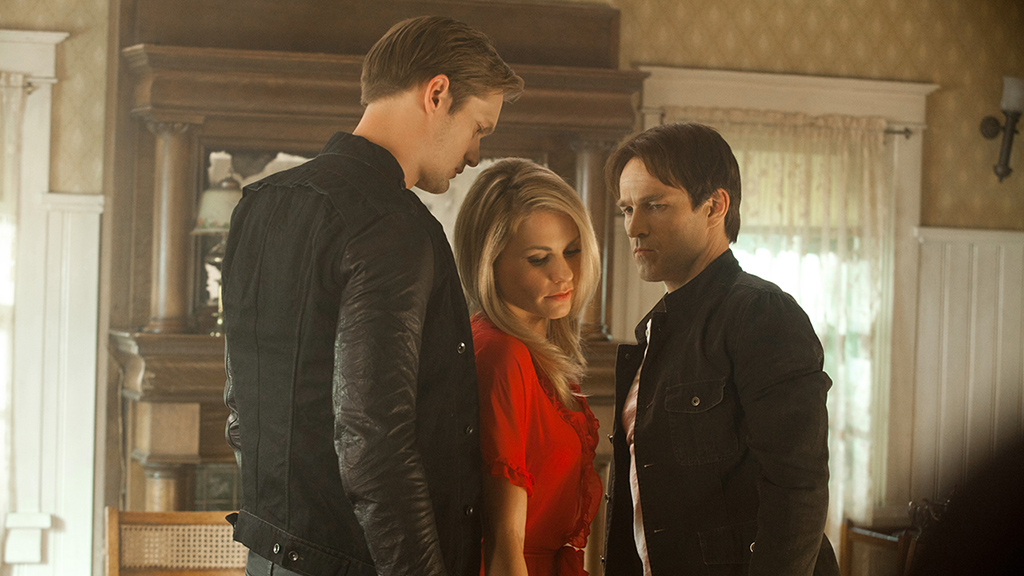 Can you blame Sookie for ending it with Bill? She not only found out he betrayed her but that their entire relationship was built on a lie. As we found out in season three, Bill had a really big secret and he’d do anything to keep Sookie from finding out what it was.  When Sookie met Bill it wasn’t fate that brought them together. It was the queen of Louisiana. She sent Bill to acquire Sookie. Even worse Bill let Sookie get beat up so he could feed her his blood. His reason for doing this was so he could get close to her.  He would also always be able to know where she was. He knew Sookie was searching for security and he used that to win her over.  Bill really did love Sookie but he struggled with his feeling for her and his obligation to queen Sophie-Anne.

Sookie’s relationship with Eric was different. She was initially attracted to the sense of danger and pure sex that oozes out of him but she never trusted him. I think that began to change when he revealed Bill’s secret and admitted he never gave up hope she’d come back even when everyone else did. Sookie started to see him in a different light. When Eric lost his memory she fell in love with his vulnerability and innocence.

When Sookie’s world quickly began spiraling out of control she knew she had a tough decision to make.  She used her fairy powers to save Bill from a Marnie controlled Eric. In the process Eric regained his memory. Being faced with the thought of loosing Bill, Sookie realized she still loved him. With Eric back to his old self Sookie began to doubt the future of their relationship. Being older, stronger and wiser Sookie knew she could never get back what she had with Bill or Eric so she had to let them go.

After discovering that Bill (Stephen Moyer) was working for Queen Sophie-Anne to gain information on her, Sookie is “learning to stand on her own,” Anna Paquin says. “At the end of last season, she was at a point where she was willing to walk away from everyone and everything, particularity those troublesome boys. It’s not that she doesn’t want or need anyone, she just isn’t dependant anymore.” That’s OK for Bill, though. “Bachelorhood kind of turns out all right for Bill,” Moyer says. “He’s decided to enjoy it while he can.” TVGuide.com

I think season five will reveal a stronger, independent more confident Sookie. She’s learned that she can stand on her own. Once she takes time to heal her broken heart Sookie will find love once again.  I see her new love interest being someone who is a mix of Bill and Eric. Alcide is a sexy, sensitive werewolf that has a hint of danger about him. He also gives Sookie respect and a sense of security. Although he is the obvious choice for Sookie he isn’t the only choice.

We are going to learn more about the fairies in season five. Sookie finding love with one of her own may be just what she needs to get over her vampire lovers. Not only that, but a relationship with a fairy may help her discover who she really is and reveal her true potential.

“Season 5 will explore more fairies, new fairies, fairies in a way you haven’t really seen fairies. We will all, as well as Sookie, come to understand fairies more than in previous seasons.” [Raelle Tucker, 09.13.11 – EW] www.trueblood-online.com

This season the vampire’s world begins to fall apart. Eric and Bill will have to team up and learn to work together while protecting each other. Could this new found bromance lead to a new kind of Sookie, Eric and Bill love triangle? We know that the thought has crossed Sookie’s mind. Could her fantasy become a reality? Would Bill and Eric share Sookie if it was the only way to have her in their lives? I can’t see that happening. Sookie loves them both but could she love them equally? Eric’s not the sharing type. Now that he has his memory back would Sookie be able to love all of him, the good and the bad? Could she ever find a way to trust Bill again?

Is there still hope for Sookie and Eric on True Blood?
Considering that Sookie swore off both Bill and Eric in the season finale, it’ll be a while before we see any movement on that front. “The feelings are still there for both Eric and Bill,” Alexander Skarsgård tells us. “The attraction is still there, but they’re preoccupied, and so is she.” Instead, look for Bill and Eric to team up while the vampire world begins to both expand and collapse in the coming season. “The guys have usually tried to kill each other and now suddenly have to learn to become friends and protect each other and work together.” TVGuide.com

Quinn and Sookie have a relationship in Charlaine Harris’s Definitely Dead. Will True Blood’s writers shake things up by introducing a new character who will compete for Sookie’s heart?

There are plenty of hot men in BonTemps. We’ll just have to wait and see which one Sookie will end up with. Whether she chooses vampire, shape shifter, werewolf, witch, fairy or human, Bill and Eric aren’t going to let her go without a fight.

Will Sookie find love again? Who will she choose?