This special auction is to benefit my niece, Laura who has Stage 4 Lung Cancer.

A bit about Laura and some family history: 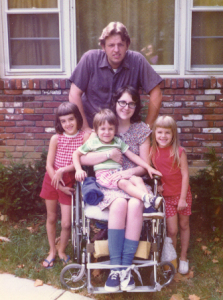 The Youse family. Laura is seen on the right as a child, next to her mother, my sister Janie.

Laura is the daughter of my older sister, Janie.  Janie and I pretty much grew up side by side, slept in the same room our whole childhood and were very close. However, we had different goals in life; I went to college to be an artist and Janie decided to get married early and start a family. She had three lovely children (two girls and a boy, Kim, Laura and Eddie), but just as she turned 30, she discovered that she had Multiple Sclerosis. MS is a horrible disease and it took it’s toll on my sister and she only lived into her late 30’s leaving her husband and three children to cope with life without a mother.

Back in August, Janie’s daughter Laura, who is now an adult and a mother herself, announced to the family that she had been diagnosed with Stage 4 Lung Cancer. Everyone in the family was shocked and I personally find it amazing that someone so young as she is could become a victim of this disease and that it is so far advanced. We are all praying for Laura’s recovery through this difficult struggle.

She is now going through chemotherapy treatments and, while I know it’s difficult, she is doing a great job of coping with the illness. However, Laura doesn’t have health insurance to pay for the exorbitant amount of money it takes to pay for these treatments, so we’ve decided to try and help in some small way, by auctioning off three of our True Blood Stephen Moyer related items to help pay for Laura’s treatment.

About the Auction – this is a very special auction with three of our favorite Stephen Moyer items. The auction consists of the following three items:

Please bid as much and as often as you can so we can raise as much as possible to help Laura with her lung cancer treatments.