Stephen Moyer says Milus Corbett uses sex to get ahead 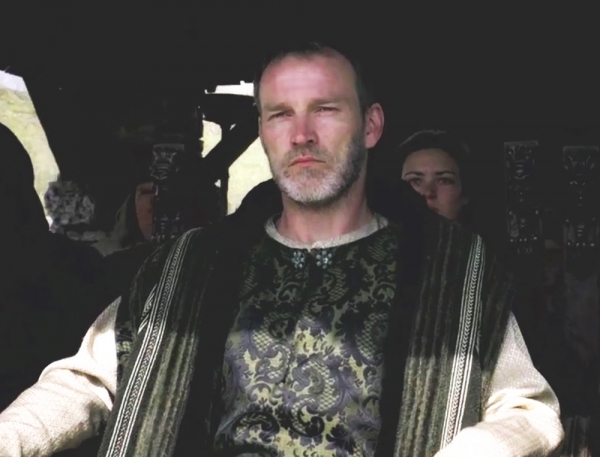 Stephen Moyer is already back in Cardiff, Wales continuing the filming of his new series, The Bastard Executioner after flying back to Los Angeles for a couple of days last weekend to attend the TCA15 panel and give interviews for show on Friday, August 7, 2015.

In one of the interviews, he said that we can expect more gory bloodbaths, bad teeth and opportunistic sex in his new role as a sword-slaying chamberlain on FX’s new medieval drama set in Wales.

“I’m quite squeamish around blood but I’ve gotten quite used to [graphic sex scenes]. “There are a couple of moments in this show that are not quite that, but not a billion miles away. It seems to be a path I’m going down.”

Having to wear prosthetic teeth while delivering dialogue is another talent that Moyer, who wore fangs for seven years on the HBO vamp drama, has become proficient at. And since there were no pearly white, Crest smiles in the 14th century, the entire cast of “The Bastard Executioner” was outfitted with teeth casts.

“We all have pieces that we put in, bottoms and tops,” Moyer said. “What I actually respect about that is — and I’m talking for Kurt here, so I don’t know this — but I don’t think you want to be criticized for something as stupid as shiny teeth. When you’re looking at the screen, you want to not be thinking about little, tiny details that could have been better.”

According to Moyer, his character Milus Corbett is a man on his way up the power ladder. He comes from nothing and is building himself up to try and be something — and he will do what needs to be done to achieve his goal, including having sex with anyone who can help him along the way, be it male or female.

“I asked Kurt a question about it and he said, ‘Sex is power,'” Moyer says. “In modern society, we like to put things in boxes and go, ‘This person is like this. This person is like that. This person doesn’t do this, therefore, he won’t like this over here.’ If you look at some societies in the world right now, for instance, a society where sexual relations are not allowed before marriage, homosexuality is quite a part of boys and girls growing up. The only chance they get to experience any kind of unraveling who they are is with their own sex. I think that was probably the case in Medieval times.”