Stephen Moyer talks hurricanes and making the ‘The Caller’ 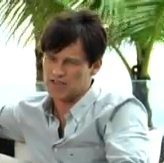 In the video below with EXTRA while he was in Puerto Rico for the Premiere of his new film The Caller, Stephen Moyer talks about what it was like being there with the crazy weather and no electricity, but also about how much he is impressed by the film and glad to have been a part of it.

During their stay in Puerto Rico, the weather was so bad that the premiere was delayed due to the power outage. Moyer joked about the situation, saying, “We haven’t got any electricity, nobody’s showering… we’re all having cold showers. Uh, yeah, you stink!”