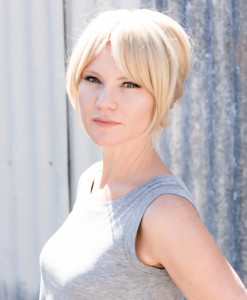 Tara Buck plays the strung-out, over-glamored, bar-slinging fangbanger we all know and love, Ginger and, she plays her so well. Tara scored a major victory this week with one of the series’ greatest-ever, and certainly one of its funniest scenes when she finally was able to fulfill her dream with Vampire Eric.

Read the interview below with Tara about her character of Ginger.

One of my favorite scenes in the whole series is the one in which Ginger rides Pam’s coffin to keep it closed and Pam inside safe from the witches. Can you tell me everything about that scene?

That scene definitely became one of my favorites as well! In the script it was just one line, no description, as kind of an after-thought after the preceding scene with dialogue. The witches are coming, Ginger tries to keep Pam in the coffin. That’s all it said.

So, I didn’t know what that looked like or even how the set would look or anything. I loved the scene right before right as well, where Pam has the skin-eating disease and she needs shots, and Ginger is giving her shots.

She’s laying in that pink coffin, which I think is hilarious, and she kind of looks like Voldemort covered in that strange, weird see-through wonderful makeup, and you can see her veins and everything.

So, we started there, then I shut the lid on the coffin and [Pam] screams … I think she curses, in fact I think she says “Fuck me!” — and Ginger had to jump. We spent the day doing that scene, and then we setup for the next shot and it was like, “OK, you’re gonna come down the stairs and there’s the coffin … what would you do?” And then they showed me that it was actually shaking. They had it on a rig, so it was actually moving, and I thought “Oh, that’s wonderful!” They had this gigantic airplane turbine-fan looking thing — a big huge wall fan.

They just said, “So, you know whatever. It’s just going to start shaking, rocking a little bit. Whatever you want to do to keep her in there. We think it’d be funny if you get on top … or use your body to keep the door closed …” and I was like “OK … cool.”

So I come down the stairs, and it starts to shake and — I get on the coffin, and I swear it was one of those things where I felt like the crew was scheming, like, “This is so funny!” — and so they ramped up the rocking, and [she laughs] so I started bucking more and the wind is really ripping through there, and I’m screaming.

And you know we did it once and people were laughing, and they’re “So, let’s do it again! Just keep going — just keep screaming!” and so we just did the extended version where it just kept bucking, and I was sliding all around, and the wind kept blowing, and I just kept screaming and screaming. And finally, drool started dripping down the side of my mouth — and I was like “Oh my god! Time out! I’m slobbering on top of the coffin.”

And that was it — and I think they kept a cut from that. But they had a full extended version that — whenever there was a long day on set or somebody needed a laugh, they would turn that on to the monitor and everybody would gather around and crack up – it was kind of a thing on set that season. It was really hilarious! 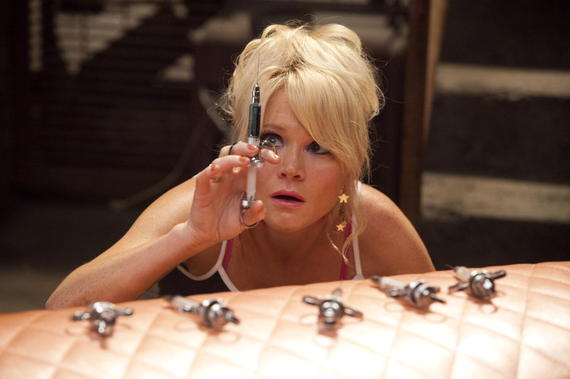 That was really the first scene that the scream made its way into the character’s profile. I screamed in the first scene of the season before, so season 1, but this was the first time Ginger had come back. I think it may have been written in the script that I screamed once, and I just thought it was funny. I thought it was funny she shoots him. She says she hates guns … she comes out … she’s so tough — trying to be so tough — and then personally I thought it was hilarious. But then she picks up the towel and brings him a towel and screams and looks at towel and screams because it’s so dirty. I just thought — the more she can scream the funnier it is when he’s the one who is shot and he’s laying on the ground — just … “Jesus Christ who is this woman?!” 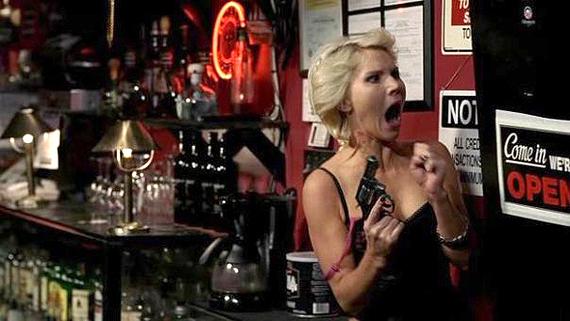 Does scream come from somewhere?

Ginger just is … it’s hard to tell exactly where those quirks of the character originate. But there’s something very … The first time Ginger screams, she screams and then she throws up. [I laugh] Eric and Pam make this comment like, “Oh jeez, humans!” There’s just something about that that is hilarious that then she’s the one that they choose to be with. She’s like a guard do, the guard dog that won’t stop barking. [she laughs]

They keep her but there’s this one area where she’s totally out of control, and I think that’s funny. [she reminisces] I also think it’s funny she’s always dressed in these short dingy outfits and heels to the moon. In that particular scene, we were shooting behind the bar; at the time we were still shooting at Alex’s Bar in Long Beach. So, it’s a real bar that they would turn into Fangtasia.

So it’s a real bar, and it looks relatively similar to the original Fantasia — it really looks like that! Behind the bar on the floor there is that thick rubber bar mat with holes in it to keep you from slipping. That was really in there, but Ginger is wearing these insanely high spike heels, so I kept sort of stumbling through that with the heel getting stuck as I walked along. And I’ve got a gun … in other words it was ridiculous. There’s no way that on set in the moment that you don’t think this is ridiculous and you might as well just play it because obviously she doesn’t think it’s ridiculous. This is her world. So, you might as well just go as far as you can with it.

Last week I spoke with Carrie Preston (Arlene) about wrapping the show and striking the set. She was pretty openly pissed that the cast, even though they had filled out forms for cherished items, did not receive the props they’d hoped for when Screen Gems and Warner Bros. swooped in and “stole the set” as she claimed. I know you had a few items you were eyeing from Ginger’s house — did you get them?

No! So … I’m actually happy to hear that that I’m not the only one! There were so many — seven years! of amazing props. All kinds of wonderful pieces, so I wasn’t sure what had happened to them. We had officially all filled out things, and thought we were going to get some treasures.

I did get a few of my costume pieces which were gems to me, but you know there were things in Ginger’s house that I thought were hilarious. Everything looked like it had been stolen from Fangtasia .. which … of course … [thinks for a second, then laughs] Or! Maybe Ginger thinks she’s borrowing them, and she brings them home and then of course she forgets. Oh, you know, stickin’ stuff in her purse at the end of the night to bring it home

How do you feel about Ginger’s story?

What I think is so cool is — Ginger really got developed over the full series, and only because it turned out to be fun, and the fans responded to her. But otherwise, you know in the book, Ginger is mentioned a few times, and then gets her head turned around by the witches, and is toast. So, as a magical twist of fate in life, Ginger actually ended up with a wonderful story, and I LOVE that she came up with the idea of Fangtasia. I think it was really sweet.

Part of my favorite thing about what happened with Ginger was that she turned into this funny character, and I love doing comedy, and I love that there’s a show like True Blood that has so many different qualities to it that you can’t quite put it in a box. And there’s this broad humor in sometimes Ginger seeing something that I just love.

Do you have any final thoughts to impart to the fans?

Truly I feel like Ginger kind of got to be the fan on set in the world of True Blood, and so I’m happy to say that ladies and gentleman, don’t be too mad, but I’m happy I got to take one for the team!

Read the entire interview with Tara, which is certainly worth a read, by going to: huffingtonpost.com
Tagged