Tara Buck tells how Ginger finally got her man

Definitely a huge WTF moment in last night’s episode was the unexpected sex scene between Ginger and Eric. I laughed so hard I cried! We can always count on Ginger to make us laugh!

Tara Buck reveals all about Ginger’s 30 seconds of delightful bliss to TVLine. 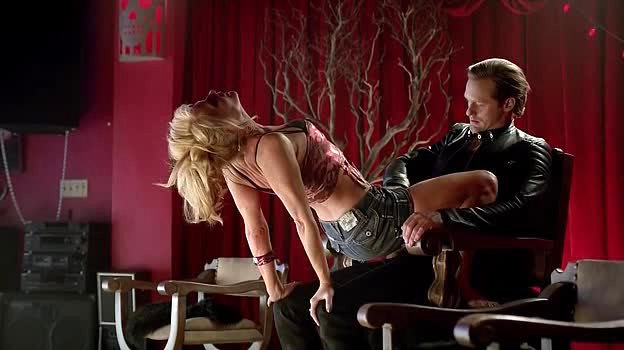 TVLINE | When you first read the script and saw that this was finally going to happen, what was your initial reaction?
I felt good! This is a victory for Team Ginger! There was some teasing along the way from the writers that [sex with Eric] might be in Ginger’s future, but I wasn’t really sure if or how it would actually happen. Before I actually saw the script, Alex [Skarsgard] said to me, “Have you read the script? They finally wrote it! We finally do it.” I was like, “We do?” And he was just laughing. I made him give me a play-by-play of what happens, so I had a little heads-up. The writers are so funny and so creative that nothing quite compares to actually reading the script. There were so many wonderful details; they really covered all the bases.

TVLINE | I also loved how quickly it ended, considering how much build-up there was.
[Laughs] Right?

TVLINE | But even with it being so short, I know those scenes always take longer than you’d think to film. How long did you two work on this?
We shot for a while. I feel like it was a full day, but I’d say we shot for … a good long while. I was physically exhausted by the time we were done. My dismount is extremely physical, as you witnessed. That was some core strength you saw there. I was sore the next day and exhausted that evening.

TVLINE | The whole thing felt authentic for Eric and Ginger. How much were you guided, and how much did you two just make up along the way?
It was actually a great combination. The writers wrote a wonderful scene, all the dialogue that leads up to it, but the actual act — the mounting and dismounting and whatnot — was not written, so we just figured it out right there. Alex is amazing to work with. He’s incredible and funny and has all these ideas. We did a rehearsal to block it out and get an idea of what was going to happen, and the director loved it and said, “Well, I think you should do it just like that.” I actually had a stunt double, but I didn’t want to use her. This was Ginger’s big moment, and wasn’t going to give one second away! So I had to figure out how to do all of it myself.

TVLINE | And figure it out, you did. Let’s talk about the sound she made. I don’t think I’ve heard anything like it.
[Laughs] There was one great line in the script that said “the sound is eerie.” So I thought, “Oh my goodness, that’s so wonderful and weird and not, of course, what anyone is going to expect.” I figured people would expect Ginger to have a big, climactic scream. It left it open to a lot of possibilities, like, you might wonder if she’s having a heart attack.

TVLINE | I honestly thought she died.
Good! And, hey, that would be the way Ginger would want to go out.