The Legend of Lilith: She’s more than a character on True Blood 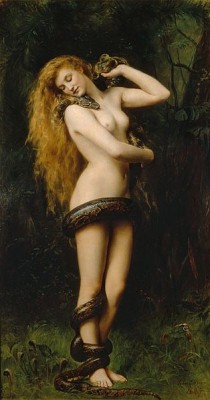 The legend of Lilith began when rabbis first noticed there were 2 accounts of the creation of woman in the book of Genesis that contradict each other.  Genesis 1 says God created man and woman at the same time, whereas Genesis 2 says he created woman from man. Although she is not mentioned directly in the bible Lilith is referenced as a screech owl, a night creature. However, she is talked about in some Jewish text and the Dead Sea Scrolls.

Jewish mythology states that Lilith was Adam’s first wife. She was created at the same time and from the same earth as Adam. This caused problems in their relationship. Lilith refused to take a subservient position to Adam, since she came from the same place he did. She left Adam and did not return to the Garden of Eden.  God sent three angles to retrieve her but she refused to go back. God then created Eve who was subservient to Adam.  As stated in Genesis 2:21-22 Eve was made of Adam’s rib. “So the Lord God caused man to fall into a deep sleep. While the man slept, the Lord God took out one of the man’s ribs and closed the opening. Then the Lord God made a woman from the rib, and he brought her to man.”

Angered by her mistreatment, Lilith vowed to weaken and kill all little children, babies and newborns. She was believed to have powers that can only be warded off by the mystical means of an amulet. Over the centuries Lilith has become known as a succubus demon. She was said to have sex with men while they slept, stealing their semen and giving birth to demon offspring. Rabbis warned men never to sleep alone so they won’t fall victim to Lilith. Some interpretations of Lilith say that she flies around at night howling her hatred of mankind and vowing vengeance.

It’s not a far stretch to see how this story can be interpreted as Lilith being the first vampire. She has essentially been called a flying demon that kills the innocent and has it out for all mankind. A woman so powerful, she could only be warded off with an amulet. These amulets would be made of gold or silver. Could this be the link between silver and its ability to keep humans safe from vampires?

“When Cain was cast out by God, it is thought that he encountered Lilith among the wastelands where she had made her home. In their coupling, she taught him the power of consuming blood. This myth certainly indicates that Lilith and Cain had traits of what are thought to be vampires. Since Lilith did not consume of the forbidden fruit from the Tree of Life, as Eve did, many believe she isn’t subject to death. Legends of the first vampires and their blood lust with the possibility of immortality could have come from these early myths. 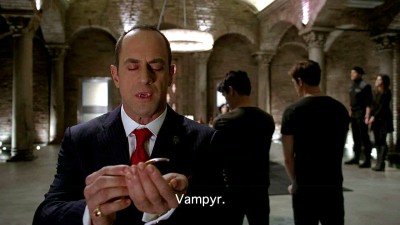 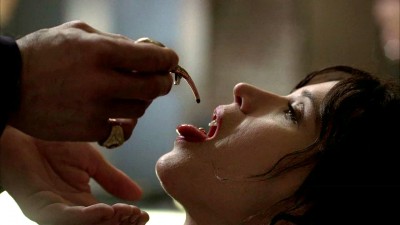 I was excited to learn that we will be meeting Lilith this season on True Blood. It is rumored that this is the casting call for Lilith

In an interview by TVguide.com Valentina Cervi was asked about Lilith’s appearance on True Blood and if she was everything her character Salome imagined she’d be. “She is the mother of everybody and people will see that in a different way. Vampires will perceive her in a different way. When Lilith appears, she’s everything that we all think she is. She’s this beautiful, seducing, motherly goddess, and then a lot of things are going to happen. I can’t reveal too much, but it’s not what it seems, and even we will be very surprised. You believe in something and then suddenly things change, then you find yourself in a crisis, but it’s great fun.” Vampires believe she is a goddess and mother of their kind. The Authority trusts, follows and believes what is written in the Vampire bible. Will she be everything they believe her to be? I can’t wait to see how her character will affect the show.

True Blood isn’t Lilith’s first appearance in pop culture. She has been a character on TV shows such as Buffy the Vampire Slayer and Supernatural. Lilith appeared in a well know film “30 Days of Night: Dark Days” as the leading antagonist. She can also be found in comic books and music. Probably the most notable appearance of Lilith is a music festival that bears her name. Founded by Sarah McLachlan in 1997, Lilith Fair featured some of the largest women in music during it’s time.