On Saturday, September 12, the Macon Film and Video Festival once against hosted actress and hometown girl Carrie Preston. For those of you who’ve been living under a rock for the past year, Carrie is currently starring in HBO’s True Blood. Earlier on Saturday, Carrie hosted a Q & A at Theater Macon for anyone interested in the various aspects of film making and advice for those interested in an acting career. Terrell Sandefur, festival organizer, once again emphasized what a wonderful thing Carrie has done by continuing to support not only the film festival but Macon, Georgia and how generous she has always been with her time and support. Carrie has been presenting her films for several years and the response is always great. 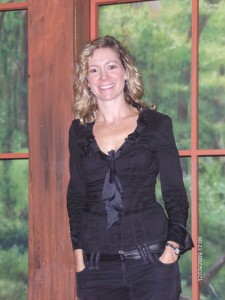 After fielding questions from audience members on various topics concerning how best to break into the acting field and emphasizing that she firmly believes stage acting is the best preparation for a career in films, the questions inevitably turned to her portrayal of Arlene Fowler, the red-haired waitress in HBO’s True Blood. When asked how she first heard of the part and how she got the part, Carrie told us that Alan Ball had suggested she might be interested in the part of Arlene. When she went in to talk with HBO, the costume designer, who was a friend of hers, suggested that she might want to wear a push-up bra and very short skirt. Carrie auditioned for Alan Ball and he sent the tape to HBO and let them know that he thought Carrie was perfect for the part of Arlene. Carrie also said that she really enjoyed playing Arlene, who is so different from who Carrie is. Wearing all the make-up, fake nails, short skirts and red wig can be quite challenging at times. She also said that she felt a responsibility as a person from the south to make Arlene a real flesh and blood character, not just a caricature of what the world associates with the south. She also emphasized that she plays Arlene as a woman who’s vulnerability comes from not having enough money and she’s made bad choices in men. After all, her boyfriend was a serial killer. She also noted that she likes and appreciates input from the directors and that it’s quite amazing the amount of work and effort that goes into each and every detail of every scene.

It was inevitable that someone would ask about those crazy orgy scenes in True Blood and asked if Carrie had a no-nudity clause because she always had her bra on. Carrie said no, she does not have a no-nudity clause and neither does anyone else who signed on with True Blood. She went on to explain that the reason Arlene wears a bra is because she is somewhat small in the bust and Arlene has more of a full bustline. That’s not something the viewing audience would miss noticing, so after pointing this out to the director, who had requested that Carrie be nude from the waist up, it was agreed that Carrie would keep her bra on. Much to Carrie’s relief! But she did say that nudity really wasn’t a problem for her, as she has done some nudity on stage. 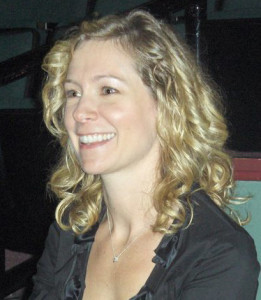 Another question asked was if Carrie felt famous. No, she replied. She did not feel famous, but she did feel successful. She felt that she had succeeded in accomplishing the goals she had set for herself when she began her acting career. But she did admit that when she’s on the Red Carpet with all the cameras flashing that she did feel just a little bit famous. She also remarked that her husband, actor Michael Emerson, is really the famous one in their marriage. He really gets the attention. Not a lot of people recognize her, mainly because she looks so different in all her roles from the real Carrie. She said she has been mistaken for a former classmate and a flight attendant! Another thing Carrie mentioned was the lack of privacy when she and her husband are out. She appreciates her fans, but sometimes they can become a nuisance and some of them are downright rude when they infringe on personal time. She told an amusing little story about a time in particular when she and her husband were at a restaurant. They saw a young Japanese couple who clearly recognized Michael Emerson. They were excitedly jumping up and down and waving. They picked up their sleeping baby and proudly shouted “we nam-a him Ben!”

Carrie is currently filming a movie called “A Bag Of Hammers” and is expecting to wrap up shooting very shortly. Before leaving Theatre Macon, Carrie graciously posed for pictures and signed autographs for her fans. As expected, she is very popular in her hometown.

Later that afternoon the town of Macon was treated to a viewing of her wonderful indie film “Lovely…By Surprise” on beautiful Coleman Hill, which overlooks the historic Hay House. After an introduction from festival organizer Terrell Sandefur, Carrie told us a little bit about the movie we were about to see. The weather was perfect, the movie was perfect and a good time was had by all. It was truly a wonderful day! Read the review of Lovely By Surprise here. 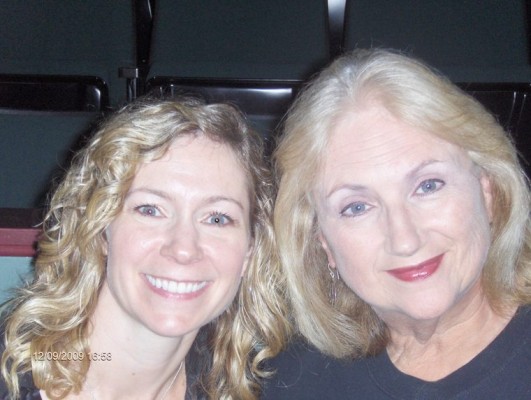 Here is the interview with Carrie:

Carrie: ha, ha, no I hadn’t. I definitely had not. It was quite challenging, it was, I think 38 or 40 degrees. We were in LA and we were in the valley and it was winter….February maybe? and we were shooting, it was a night shoot obviously. So we didn’t even start shooting until the sun went down and we went all the way until 5 or 6 AM. There were a couple of different scenes that took place in that particular location, so we had to do it a couple of times on two different night, two night shoots. Those black contact lenses were definitely disconcerting, so say the least. You can’t see, and it’s dark and we’re doing crazy things and your peripheral vision is gone. It’s akin to looking through a black peephole. It’s all black, even your peripheral vision. AND they cover your entire eye. They don’t pose any danger to the eye, but they do kind off change the shape of your eye a little bit so it was hard to put in any kind of prescription. I wear contact lenses, but they are completely different. They’re thick, it’s like blinking over something that’s thick. So, yeah, I tried to take them out as much as I could and your eyes would get dry and you’d have to put the drops in all the time. So it was a little challenging, but, you know, that’s what you get paid for.

Did you have fun playing a totally out of control Arlene?

Carrie: Yes, I did. I never knew what the scripts were going say or what I was going have to do, but I definitely turned myself over to it with full abandon.

Carrie: Yes, that’s what was required of us, you know, as if we had all taken a big hit of ecstasy or something like that. Like we were having this crazy, crazy drug trip.

Carrie: Oh, Lettie Mae is great. I don’t know why they didn’t have her there, that’s an interesting point.

What would you like to see happen to Arlene in season 3?

I was disappointed that there wasn’t more of a sweet love story for Arlene and Terry.

Carrie: Yes, I’d like to see that happen, to see Arlene more at home in her element outside of Merlotte’s.

With her little teacup humans.

Carrie: [laughs] Yeah, my little teacup humans, they’re so cute! Yes, I would like to have more scenes with the kids, just to see what it’s like, to really show the single mom aspect of Arlene.

Do you spend time around the kids and get to know them?

It does help, but the kids, they’re total pros, total professionals, and they understand the etiquette of the set. But they’re still kids, so you do have to get them to relax a little bit and it does help to spend time with them. And just play around with them and get to know what kind of games they like or what they’re doing in school, that kind of thing. But these kids are good, they get along with each other.

Carrie: Well, my idea is that they have two different dads.

Do you think that the Terry and Arlene relationship will continue into Season 3?

Carrie: I hope so, but I have nothing to back that up.

What will you be doing during the hiatus?

Carrie: I am working on film called Bag of Hammers. So I’ve been shooting that and I will wrap that up in a couple of weeks. And the rest of the time I’ve been visiting my husband, we actually got to go on a family vacation.

I heard you went to Paris.

Carrie: Yes we went to Paris, we went to Italy, Rome. It was nice to be able to spend time with my family.

I remarked that Carrie should have visited Shadaliza, but Carrie went to Umbria, not Tuscany.

Did you have a new wig this season? It looked much redder.

Carrie: No, they just cut it and used a little different style. They made some more interesting choices with it this season, a different hairstyle. The red fades on a wig, just like it does on a person, isn’t that weird. They have to re-dye it. The lights, and I think just that color in particular fades under the lights. They only have one wig, for me, and then they would have one for my stunt double.

What do you need a stunt double for?

Carrie: Well, they have stunt doubles for everybody. They had the one scene where we jumped out of the tree that they used.

I really enjoyed that scene, how funny it was to me when Arlene said “I got a yellow one.

Carrie: Oh, I made that line up. It was a total improv. Well, this was fun and I’m glad that you came.

We chatted for a few more minutes, but she had many friends and family members anxious to see her. Carrie is very gracious and nice. A wonderful person.