Written by Shadaliza for The Vault

Jace Everett: True Blood musician. We all know his voice and we all know his song. “When you came in, the air went out. And every shadow filled up with doubt. I don’t know who you think you are, but before the night is through, I wanna do bad things with you.”

The song was found on Itunes and Alan Ball thought to use it until he’d found something better: ” We used this song as a temporary main title on the True Blood pilot, a placeholder while we looked for something else, but nothing worked as well, because this song and Jace’s performance of it are, well, perfect.”

I met Jace Everett on the internet and thanks to modern technology questions and answers were exchanged between Italy and Nashville, Tennessee. I asked him about his music, True Blood, “Bad Things” and his recently released new album “Red Revelations”. 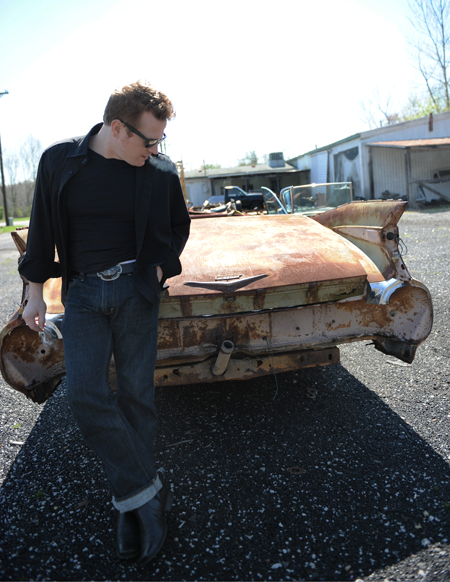 Who is Jace Everett?
Is this a trick question? I’m a singer and a songwriter that loves a little bit of everything musically. So I mix it all up in my songs and pray to God I don’t break a string.

When and how did you love for music began?
I discovered music and singing before I even spoke as a child. I was a pointer and a grunter until I was almost three. I haven’t shut up since. But singing was always really appealing. From Willie Nelson I went straight to Kiss. When they took off their make-up I lost interest though. Church was a big part of my life as a kid in Texas. That’s when I fell in love with performing. Music has been a constant refuge for me throughout my life.

By what other musicians were you influenced when you were younger and who do you listen to now?
I was influenced by some really cool artists and some really cheesy ones too. When you’re a kid you like what you like and aren’t to worried about what’s considered “cool”. So Glen Campbell, Willie, Waylon, Elvis, and Kiss are who I remember most as a little kid. Later on I got into Petty, Tom Waits, Guy Clark, Ray Charles, Marley, Dylan and the like. I’ve always been a big U2 fan. I never really understood the “hair band” thing, which was really popular when I was in school. In recent years I really got into Chuck Prophet, Ryan Adams, and even some Jay-Z. I only listen to about 10 records a year probably. When I fall in love with an album I tend to wear it out for months.

Did you have any formal training in music?
I took the requisite piano lessons as a kid. No discipline. I dropped it as soon as I could. I wish I hadn’t.
I’ve had 1 bass lesson. Again, yawned through it. I did have some formal voice training in high school and college. A little opera, anyone? Hated that to. I guess I don’t do well with instruction.

How would you describe your music?
It’s always evolving. It has elements of country, blues, Americana, rock and roll, and even some hints of jazz; harmonically anyway. I try to let it speak for itself as I’m not much for labeling things other than “like” and “don’t like”.

Can you describe your creative process, how do you compose new songs?
It happens a lot of different ways. The good stuff usually comes with a melody and lyric at the same time. Sometimes you have to really work your ass off to make lyric happen, but the music is always pretty quick. There’s no formula. I wish there were!

Many people have actually thought you sound like Chris Isaak? What do you think about that?
I don’t think I sound like Isaak. I think “Bad Things” has some of the same elements as “Baby Did a Bad Bad Thing”, similar title and a rockabilly feel. The funny thing is that I wasn’t  really aware of his tune when I wrote mine. I was actually riffing on a Steve Earle tune called “Poor Boy”, which is in a major key. I made some of the chords minor and gave it a darker vibe which led me to the lyric and melody. Isaak is great and I love what he does, but we sing very differently. He’s got a smoother voice and uses his falsetto really well. I’m more of a whiskey soaked sand paper sound!

What was your inspiration for writing “Bad Things”? Is there a story behind that song?
The initial idea was one of violence and vengeance. A guy owed me money and I wanted to do “bad things TOO you” in the original lyric. About 10 minutes into it I realized it was coming off more sexy than scary and that “TOO you” sounded a little creepy; date rape… not good! So I changed the lyric to “WITH you”. Oddly enough, half the people who hear the song think I sing “TOO you”. But I don’t. I’m really a very nice boy.

How has having your song “Bad Things” featured on the hit TV show True Blood changed your career?
Well, I have one again! My career was up on blocks. I spent a couple of years in the wilderness trying to figure out what I was going to do. Alan Ball and Gary Calamar of “True Blood” really made this new record possible. All the fans of the show have been incredibly gracious to me and the song and I can’t thank them enough. So I made them a new record instead!

Will more of your songs be featured on True Blood in future episodes?
Possibly they will. Of course, it’s not up to me. A few of the tunes on this new record were really inspired by Season 1; “Damned If I Do” is really a love song for Bill and Sookie. Not literally, but their relationship inspired the music and lyric pretty heavily. “Burn for You” is kind of the same thing. The episode where Bill walks into the sun and begins to burn up in an effort to save Sookie really got that lyric started. Several other tunes took some inspiration from the show as well, but those two are definitely in homage to the great characters in “True Blood”.

You can listen to the songs on Jace’s MySpace page.

I read in an interview that you don’t have cable, did you have it installed yet, so you can watch True Blood?
I’m seriously considering the cable thing. I have an amazing ability to waste a lot of time. Between HBO and all those extra C-Span channels I’m scared I’ll never leave the house!

How do you like the show?
The show is great. It’s funny, sexy, creepy, and sometimes even scary. (What the hell is with that wheel Lafayette is chained to!?!? Creeps my out). I love the fact that it’s more than vampire story. I enjoy how Alan Ball allows the writing to be all over the place. It’s an honor to be a part of the “True Blood” world.

Can we expect to see you in a cameo on True Blood?  Performing in  Merlotte’s?

I’d like to do a cameo as a janitor in Merlotte’s… some where in the background whistling “Bad Things” while I mop up blood and beer. Who knows?

Last month you were honored with the BMI Cable Award for your musical contribution to True Blood. Is it important to you to be an award-winning musician?
It’s important to be making a living. Awards are weird. I enjoy being respected by my peers, who doesn’t? But it always feels strange to me to get a trophy for art. It’s an honor, but it’s far more exciting to sell a CD to someone who loves what you do.

On June 22 your new album “Red Revelations” was released. What can we expect from this CD?
A lot, I hope! The CD has 11 new songs. Half were produced by the amazing team of Chuck Prophet and Brad Jones; they really helped me develop a new sound. The other half I produced myself. The band is made up of the guys I write and perform with who happen to be some of my closest friends. It runs the gamut from spooky dark stuff to really up and clapping rock and roll. You can check out some tunes at www.jaceeverett.com to get a taste. Also, on the CD version we slapped a twelfth tune on there; “Bad Things” in it’s original form.

“Red Revelations” will also be released on vinyl. Does vinyl still sell or is it making a comeback?
Vinyl is actually growing in popularity right now. I think a lot of us miss the artwork and the ceremony of sitting down with an LP. I love my iPod, but when you sit down with a vinyl record you have to make a commitment. You really listen to the music.

Where can we buy your new album?
You can get it at my website (www.jaceeverett.com), my label site (www.westonboys.com), Amazon, and of course digitally at iTunes and the like.

Where can we see you perform live?
Hopefully this fall we’ll be touring properly.