The Vault Exclusive: The secrets of the Queen’s dayroom revealed 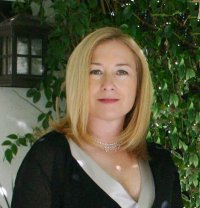 Suzuki previously worked on Six Feet Under, Shark and In Treatment; she received six Primetime Emmy Award nominations and an Art Directors Guild Award nomination for her outstanding work.

I was very curious to know more about the True Blood Season 2 sets and Suzuki graciously answered my questions about how she created the sets.

In this first article Suzuki tells us about Queen Sophie-Anne’s dayroom.

Suzuki: “I start designing the sets by reading the script and getting a good understanding for who the character is, and if there is something important, we need to convey about their lives. I will work with the writers, producers and directors and pitch ideas and we will come together on a final concept. It is always good to have everyone on the same page, and that way there are no surprises on the day of shooting. As expensive as building scenery can be, and the short timeline of television production, you don’t want anyone walking into a set and saying that it was not what they expected. I also try and do some illustrations and presentation boards to show everyone the style, colors and sometimes furniture.”

As Production Designer Suzuki and her team have quite a lot of liberty in designing and creating the sets.

Suzuki: “I do have a lot of liberty when designing sets. I usually have a general idea from the script, but I am definitely expected to embellish and enhance those concepts. I usually do a lot of research to come up with interesting ideas, and then I pitch them to everyone. Once an idea has been approved, I work with my departments to get the set construction started, and we make sure that it not only looks great, but that it functions well for the crew, the camera and the action that is taking place in it. I will then work with my decorator and come up with an idea for what the furnishings will be needed, and they will go out and see what is available to rent or purchase.” 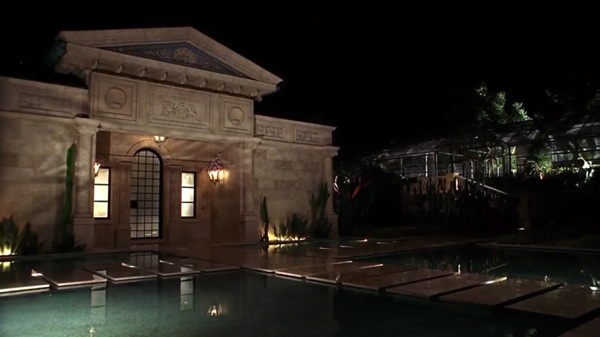 What can you tell us about the exterior of Queen Sophie-Anne’s residence?

Suzuki: “The Queen’s house is an existing location in Malibu, California, and it was definitely one of those locations that you knew was right from the minute you saw it. The pool house has a nostalgic feel to it, while at the same time seems timeless. We really wanted a space that we could turn into a dayroom and still have it feel glamorous and elegant, befitting of a Queen.

What we did was create dioramas in each window, so that the dayroom looked like it had views to the ocean. Since vampires could not be out in the day, we figured these dioramas represented everything the Queen missed about not being mortal, such as the sun and sea. It was tricky, we wanted the dioramas to appear somewhat surreal looking so that the audience understood that the Queen had created this dayroom, but on the other hand, we didn’t want the audience to think that we built this set on stage and we put some cheesy backdrops outside the windows.
It was funny; the crew arrived at this beautiful location, and was shocked to see that we had covered up all the real views of the ocean, only to have substituted them for our painted dioramas and fake seagulls. Over all I think it worked out well, and the dioramas had an elegant, Natural History museum feel to them, and not a cheap television vibe.
The water element was there as well, and we loved the visual interest it created, so we embraced it and featured it in our establishing shots of the building. It is unique and creates a romantic feel to the neoclassical architecture.”

Is that a greenhouse in the background next to the house?

Suzuki: “Yes, there is a greenhouse in the background and it is a part of the existing property. We chose to feature it as oppose to hiding it. Who knows, perhaps the Queen has a love of Orchids and she collects them in her greenhouse. It is very feasible that this character would have a greenhouse on her estate, and it is wonderful to add some depth and beauty to our establishing shot by choosing to light it up in the background.” 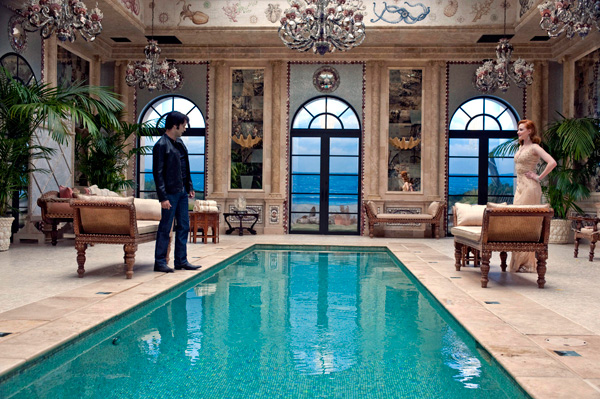 The interior of the dayroom is simply breathtaking. The amount of details is amazing. The entrance and the room are designed in a nature style that reminds me of Art Deco.

Suzuki: “What drew us to this location was exactly what you just mentioned. It does have an art deco/ nature feel to it, and the room is definitely one of a kind, with extraordinary detailing. After all the location scouting I have done over the years, in my opinion, nothing even comes close to the amount of detail that went into this pool house. We all just stood there and took the room in the first time we went there, and pictures don’t even begin to do it justice. The Statues, chandeliers, chair rail and ceilings are all made out of a variety of various sizes of seashells and corals. It is astounding, and we could never accomplish this on our budget, and time frame. It is truly breathtaking and exquisite.

I just went along with the existing architecture and oceanic feel. We wanted to just embellish on it and not detract from it.

The decorations in the entry were hand painted by an artist as per the owner. Apparently, he designed a lot of the pool house himself. 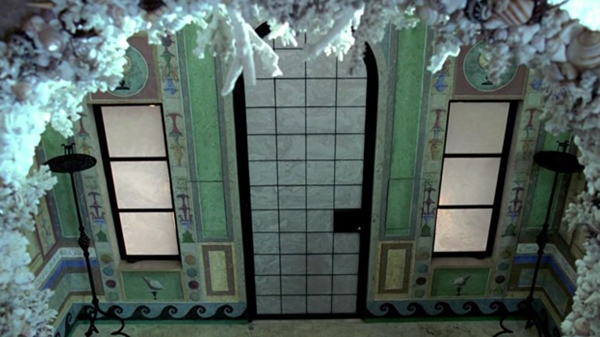 The floor is real marble, and since it was already there we had the benefit of shooting it. The owner’s budget is apparently a lot larger than our shows budget [laughs].

The furniture that we used was also the owners; we just replaced the cushions. The chairs and benches were exquisitely made out of wood with mother of pearl inlay. Again, something we could not afford on our budget. We had to be extremely careful with this furniture, and we chose to replace the cushions and add our own fabric, as well as protect the owners’ cushions from getting make up on them. The sculptures and chandeliers were created exclusively for the existing pool house by the owner; however, we did hire an artist to create large planters for the kentia palms we added in the room. She glued on miniature white sea shells to all the pots. We felt that the addition of plants to this room not only softened it, but also added to the exoticness. They also helped us cover up many reflective surfaces that are not helpful to the shooting crew.”

How long did it take to complete this set? How many people do you have in your team working on the sets?

Suzuki: “This set took us a couple of weeks to get organized. Building the dioramas was the biggest part of our job, and we had to make sure they fit into the existing openings seamlessly.  Also, we had to make them flexible by having them roll away so that the crew could access each doorway. On such a high-end location, our department has to be extremely careful not to do any damage, but yet we still have to incorporate our changes and ideas into the space. I have a large crew, from construction, paint and plaster, to decorators and art director. A lot of work goes into each and every set, and sometimes a location is more difficult to do than building a set.”

I noticed the queen’s gold powder box and the 1920’s Vogue that she picks up. Are those authentic props?

Suzuki: “The powder box was a request from the actress [Evan Rachel Wood]; she wanted to have something to do while she is speaking with vampire Bill. Our prop department went out and found some authentic vanity boxes/compacts, and this one was unanimously chosen. It did add a flare of elegance. The Vogue magazines were all authentic as well. They were purchased on EBay and we had to get permission to use them from the magazine, well worth it.”

And how does Suzuki think the Queen decorated the other rooms in her residence?

Suzuki: “I think the Queen would continue with the 1920’s feel, it is who she is, a timeless, elegant beauty, who appreciated the past. Of course, it would always have a hint of the modern as well.”

Photo credit: HBO
© The Vault – TrueBlood-Online.com
Reproduction is not allowed.