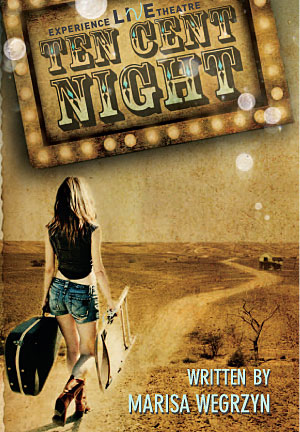 I have said this before and I will say it again (on roof tops if I have to), what makes True Blood as successful as the great HBO series before it (i.e Six Feet Under) is their potpourri of amazing talented actors. The truth can be said with their supporting cast members, and I have witnessed this first hand when I was invited to see Tara Buck’s play, “Ten Cent Night” at the Victory Theatre Center in Burbank, CA. We all know Tara to be the wild-eyed employee of Fangtasia, beholden to her master, Nordic Vampire and Sheriff Eric Northman (played by the uber talented Alexander Skarsgård). 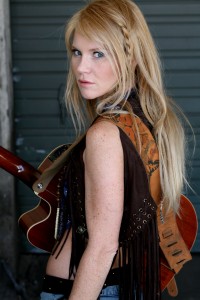 Tara plays the lead role as Roby Finly, daughter of famous Blues Musician, Hewitt Finley. Roby has estranged herself from her family…abandoning them while they languish after their father took his own life leaving a painful permanent reminder in the form of a bullet hole engraved on the wall of their Texas home. Roby leaves her fraternal twin sister, Dee (Caitlin Muelder) to keep the family together from destitution. You will discover as the play progresses, that the surviving children were not even given the rights to their father’s royalties on his hit song, “Ten Cent Night”. The younger siblings are also fraternal twins, played wonderfully by Alison Rood as Sadie Finley and Shane Zwiner as Holt Finley.
It’s a fairy tale, the modern kind, with incredible plot twists – mistaken identity, secret incest and an altruistic aging prostitute that may hold the answer to the heart-broken family’s woes; and like any fairy tale, there is a happy ending. The Chicago Tribune hails it as “…a juicy chunk of Texas gothic that plays like a classic country and western song”. I also give praise to Marisa Wegrzyn who is the creative scribe of “Ten Cent Night”.

It’s singularly one of the funnest, touching stories I have ever seen and I bow down to Tara Buck’s acting prowess. As she slides in and out of the stage, every inch of her is Roby Finley…she puts on her persona like a second skin and with masterful skill. It’s not hard to imagine she’s played an array of roles before True Blood. She’s remembered and given critical acclaim for her role as “Rhea Reynolds” in Nip/Tuck and has guest starred in TV hits such as: The Shield, Without a Trace, The Closer, Bones and Cold Case.

I met with Tara after the play and just as Anna Paquin and Stephen Moyer impressed me with their humble disposition, the ever gracious Tara did the same by giving me a hug to show her thanks. She is appreciative of the support the fans have showed her and asks we continue to do so by watching True Blood. Tara, your wish is our command. 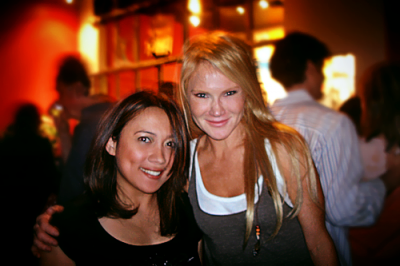 The Vault: Tara, what makes this play special for you? What make this role interesting for you?

Tara: When I read the play I immediately connected with the role.  Marisa Wegrzyn is a wonderfully talented writer and I think it’s quite an honor to be bringing one of her characters to life.  She currently has two commissions with both Steppenwolf and Yale.  Marisa creates complex characters that are layered with contradictions.  My character Roby is tough and vulnerable.  She’s street smart one minute and has an almost childlike naïveté the next.  She’s an alcoholic, petty thief, her parents both commit suicide and she’s fighting to create a career as an artist while living in her famous musician father’s shadow.  Greek tragedy right?Oh no, this is a comedy!  It’s a dark, dark comedy of course.  My role has been a challenge but that’s the main reason for doing live theatre.

The Vault: How did you get the lead role and did you initially auditioned to play Roby?

Tara: I initially auditioned for the role of Roby.  I ended up having three different callbacks and after the first reading they asked me to prepare for both of the sister roles.  Roby and Dee are twins and there was a lot of mixing and matching.  At the final callback Caitlin Muelder was there to read for the role of Dee and when we read together it was an obvious match.  In addition to actually looking alike, we both have a very similar sense of humor.  She’s wickedly funny but I’ve been watching and shamelessly stealing!

The Vault: How do you feel about Roby’s family situation? Why do you think Roby left them?

Tara: The family dynamic is crazy in this play… but isn’t it in real life.  We leave the nest, we try to prove we can stand on our own and that we have a voice of our own.  We make mistakes more than we want to admit and then we realize we are more like our parents then we ever knew.  Then we find some humility and carry on… That’s what it feels like to me any way.  What Roby discovers in this play is she is deeply connected to her family even though she’s been trying to get as far away from them as possible.

I grew up in a small town in Idaho.  I wanted to divorce myself from my family and create a new life.  I wanted to be fancier, cooler, smarter and more worldly.  Now I play characters that remind me of my Mother or my Father or that feeling in my gut I carried around as a child.  Weird but it’s personal and it’s what I find interesting right now.

The Vault: If an opportunity presented itself would you reprise this role in the future? Would you play another character?

Tara: I would reprise the role in a second AND I would play Roby again… unless of course it was some how possible to play both roles (you know like Anne Heche did in Another World!) The hair pulling sister fight might be tough to pull off believably.  Both parts are fantastic and each has their challenges but at this moment of my life I’m more fascinated by who Roby is.  The courage it takes for this character to move from the beginning of her journey to where she ends up.  Human courage is a beautiful thing and from my observation it seems to takes an enormous amount for all of us to get through the day let alone a lifetime.  I’m drawn to characters who are underdogs.  I see Roby as this iconic Janis Joplin-esc character in so many ways.  She’s ridiculously self destructive but it’s because she has a fire burning in her gut.  Roby is a true artist and a lost soul. 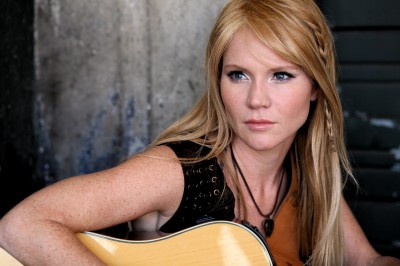 A well-written play, with all of its passionate feuding familial frenzy, is a barrel of Southern-fried fun! Do see it!” – Toulcan Times Critic’s choice 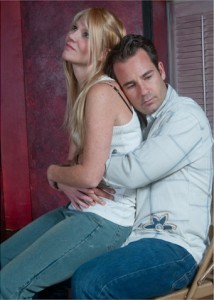