Historic First Christian Church-Disciples of Christ is undergoing a facelift with a nifty new paint job courtesy of the generous people of HBO’s True Blood. 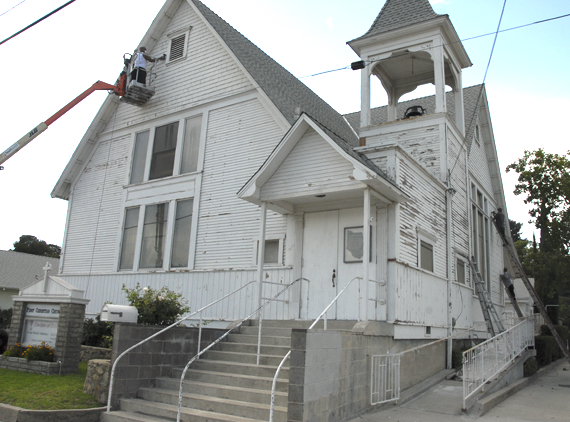 To the production folks of HBO’s True Blood the church is where the humans and vampires of Bon Temps, a fictional, small town in northwestern Louisiana, gather to worship, marry and bury the dead… lots and lots of dead.

The church has been featured in the series and is a focal point of the season finale, which in its seventh year will be the series last.

Pastor Jenny Crosswhite said the production, which filmed twice at the church, provided the funds to paint First Christian, one of the oldest wooden churches in the county after the initial location shoot.

“Actually,” said Crosswhite, “after they filmed the church the first time they asked that we hold off on painting the building until their season was wrapped up,” just in case they – like the vampires that are dead but just won’t stay down – would return.

They did and the joint production by HBO and Alan Ball’s Your Face Goes Here Entertainment returned to Santa Paula in June to film the finale.

Santa Paulans, long used to celebrities filming or living in their midst, were blasé about the production but Crosswhite said the shoot did attract groupies.

“They had a couple of fans that came all the way from Arizona to watch the filming, sitting in their lawn chairs,” across the street from the church.

Crosswhite said the overall experience was good: “HBO was amazing to work with, they were really great as was Dave Manning,” the SPPD senior rangemaster who coordinates filming for the city and Talia Wunder, the merchant and resident film liaison.

The production company even gifted the church with some decorative items.

When it came time to start the painting project Crosswhite said it created much discussion among the congregation, which “Went around and around,” on the issue of keeping the church all white, changing its color or having a decorative trim, conversations that included noted artist and church member Judy Klement.

“The surprise was the congregation voted for a gray-green trim,” in two shades to accent the architectural features of the building.