True Blood Behind the Scenes: The Fangtasia Dungeon and the wheel

True Blood’s second season showed us an interesting variety of sets. The most sinister of them all is without a doubt the eerie Fangtasia dungeon where Eric locks up his human prisoners.

I asked True Blood Production Designer Suzuki Ingerslev, about this set that she designed. “It was definitely the writers who inspired the design of the Fangtasia basement with their grisly depiction of what they called the “Saw” room”, Suzuki answered.

The writer of the episode Alexander Woo explains how they came up with the idea of the dungeon: “Since we decided that Lafayette was going to survive into season two, we obviously needed to address where he had been during the two weeks after his abduction. Alan Ball came up with the idea of having him in a sort of horror-movie room where he would be suffering the consequences of dealing vampire blood. From there it was a matter of coming up with the bleakest, darkest place we could imagine. Suzuki Ingerslev and our Art Director Cat Smith were the ones who brought it to life.” 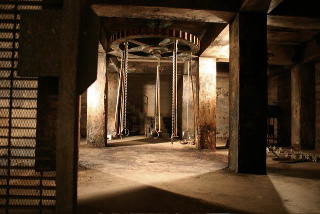 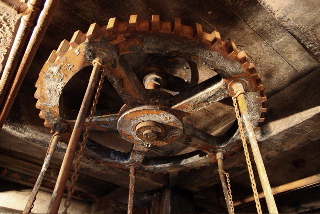 According to Woo the dungeon he created represents “the secrets that all of us prefer to keep hidden and buried. The vampires in our world have come out of the coffin, but that room is a concrete representation of the darker side of vampire-human relations.”

Suzuki explains how the oppressing atmosphere of the Fangtasia basement was created on set: “Ordinarily it would have been any kind of basement or storage room but in the hands of Eric it became a grisly prison where the worst kind of atrocity is practiced. It was built entirely on stage. All the blood, rust, gore and decrepitude were created by our fantastic painters and plasterers. The wheel itself was built by our prop makers and is actually all made out of wood to look like metal. The wheel was dreamed up by Alexander Woo, as a device Eric rigged to torture people. It is a complete view into his utter lack of compassion. “

The significance and purpose of the wheel to which the prisoners are chained were discussed and speculated upon to great length on the True Blood message boards. Sometimes we try so hard to see symbolism in every scene that we overlook the obvious and simple explanation. Alexander Woo explains that the purpose of the wheel is surprisingly connected to one of the primary human bodily functions.

“I thought it would be funny to find a very complicated solution to a very simple problem, namely how do you let the prisoners go to the bathroom while still keeping them far enough apart so they don’t kill each other? I suppose you could chain them all to the wall and give everyone their own bucket, but that’s a lot of buckets to empty. Why not have a single bucket that only one prisoner can reach at a time? That’s where the idea for the wheel began. I also thought it was funny that any time one prisoner needed to use the bucket, it would inconvenience everyone else. In the end, the wheel became a great visual representation of the hopelessness of everyone’s fate in the dungeon, but it all started as a way for the prisoners to use the toilet.”

In the show it was Eric who came up with both the concept of the vampire bar Fangtasia and the torture dungeon that lies beneath it. What does this tell us about Eric’s character according to Woo?

“Eric has no insecurities about who he is. He understands that there’s a side to vampires that would make humans very uncomfortable, so he’s shrewd in keeping that side hidden away. The upstairs of Fangtasia is Eric’s public face. The downstairs is the darker side that humans don’t need to know about – unless they’ve crossed him. I think the bar and the dungeon are both equally Fangtasia, just as the roles of club owner and vampire sheriff are both equally Eric.” 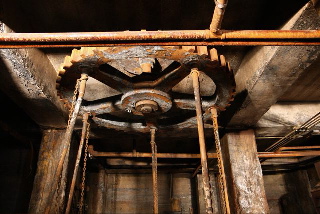 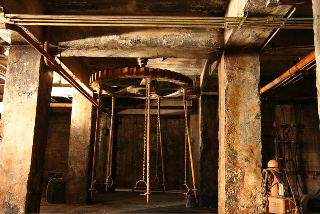 The True Blood vampires obviously all have a very dark side to them, but so do many human inhabitants of Bon Temps. The dungeon shows us the cruelty of vampire nature, I asked Alex Woo if this is really so different from the cruelty Eddie suffered in Jason’s basement?

Woo: “You’re right – they’re very much the same. Jason’s basement in season one was a place for two of our humans to indulge their savage side, much to Jason’s disgust, eventually. The Fangtasia dungeon was one of our first glimpses into the parallel underside in the vampire world. Basements are never pretty, are they?”

Finally I asked if he thinks that humans and vampires will ever be able to live in a somewhat peaceful coexistence.

“Probably not for the life of the show. What fun would it be to watch then?” answers Woo. And I think we can all agree with that. Keep the drama coming!