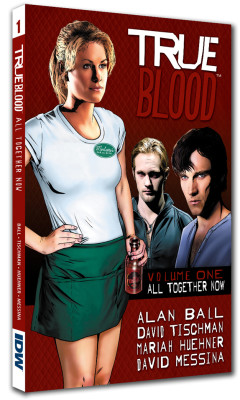 IDW Publishing and HBO® are proud to announce that the hardcover collection of its first TRUE BLOOD comic story arc, ALL TOGETHER NOW, debuted on the New York Times Best Seller list today. The prestigious list notes the top selling books from the previous week, and TRUE BLOOD captured the number six spot, after just one week on sale. This compilation of all six issues from the first series of the comics features bonus content, including a cover gallery.

“To have our first comic compilation debut at number six on the best-seller list is amazing,” stated James Costos, VP Licensing & Retail, HBO. “It is a true testament to the quality of the product and reach of the True Blood brand.”

To celebrate the huge success of the first TRUE BLOOD comic series, several cast members of the hit HBO show will be signing copies of the collection at a Barnes & Noble, The Grove in Los Angeles, on Saturday, February 26th, from 1 to 3 pm.

Featuring the same erotically-charged romance, wry humor, intriguing mystery and suspense the show has become known for, the story treats readers to new insights of their favorite characters. Developed with show creator Alan Ball, along with series writers Elisabeth Finch and Kate Barnow, ALL TOGETHER NOW was co-written by David Tischman and Mariah Huehner. The series was beautifully illustrated by top tier artist David Messina, with additional art by renowned artists J. Scott Campbell and Joe Corroney.

“One of the most exciting and gratifying parts of my job is seeing the reactions of fans,” said IDW True Blood Editor Scott Dunbier, “And I can tell you emphatically that True Blood fans are rabid—which is, of course, delightful.”

To read the rest of this article, click here.