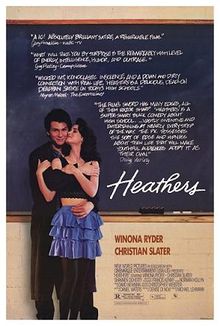 Michael Lehmann, one of True Blood’s premiere directors will be at the screening of one of his films, “Heathers” at the Aero Theater in Santa Monica, CA on Friday night, August 27.

Michael Lehmann directed Heathers in 1988 and it was written by Daniel Waters, who will also attend the screening. The film became a cult classic, with high rentals and sales business. In 2006, it was ranked #5 on Entertainment Weekly’s list of the “50 Best High School Movies” and in 2008, it was ranked #412 on Empire’s list of The 500 Greatest Movies of All Time. Heathers brought director Michael Lehmann and producer Denise Di Novi the 1990 Independent Spirit Award for Best First Feature. Daniel Waters also gained recognition for his screenplay, which won a 1990 Edgar Award.

Synopsis: HEATHERS, 1988, tells the story of shy Veronica (Winona Ryder) who aspires to become a member of the most popular clique in school, but instead joins forces with a quirky rebel (Christian Slater) who gleefully plots to kill off the cool kids and make it look like suicide. Director Michael Lehmann perfectly delivers a razor-sharp tone and screenwriter Daniel Waters jams the piece with quotable (and often hilariously profane) dialogue.

There will be a discussion following the film with director Michael Lehmann and screenwriter Daniel Waters.