Have you ever asked yourself where they film the various scenes of True Blood? We found a site that tells you lots of information about the many locations that the show has used and continues to use.

Seeing Stars in Hollywood is a web site that is the ultimate guide to celebrities and Hollywood, you can find links to all sorts of Hollywood information, like landmarks, restaurants owned by the stars, location shooting, movie studios, where the stars are buried, etc. However, they also have a section on the site devoted just to True Blood locations. As many of you know most of True Blood is shot in Los Angeles or on locations in Southern California, but they also go to Louisiana and to other locations for filming.  At “Filming Locations Of True Blood”  they have most of the locations chronicled for both the Southern California and the Louisiana locations.

In Louisiana they shot the scenes where they burned the vampire nest in Season 1, episode 5 and where Jason and Amy first hooked up in the gas station in Season 1, Episode 7.  You can also find:

Did you know that Bill Compton’s house is an existing plantation.  While the sets are in California for the interiors, the exteriors of Bill’s house were originally shot at the Roseneath Plantation in Louisiana. The house was built in 1845, and served as a hospital for injured soldiers during the Civil War. The plantation takes up a large parcel of tree-filled land (much of it dotted with cattle), on both sides of the 4900/5000 section of Highway 5, midway between Gloster & Kingston, Louisiana. That’s about 20 miles south of Shreveport & about 10 miles north of  Mansfield, LA. It is not open to the public. 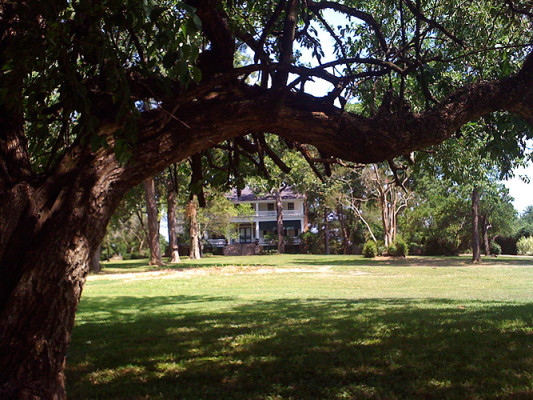 The French Restaurant where Bill asked Sookie to marry him, Season 2, Episode 12

The French restaurant scenes where shot at The Stockade Bed & Breakfast, which is located on the south side of Baton Rouge, Louisiana. They shot the scene in the Stockades “great room” (which was made to resemble a restaurant for the occasion). The property is listed as an archaeological site on the National Register of Historic Places. The Highland Stockade was a Civil War-era Union fortification and camp site, built by Union troops in 1862 (when the Union Army first took Baton Rouge from the Confederates) as a check-point to protect the southern entrance into the city. 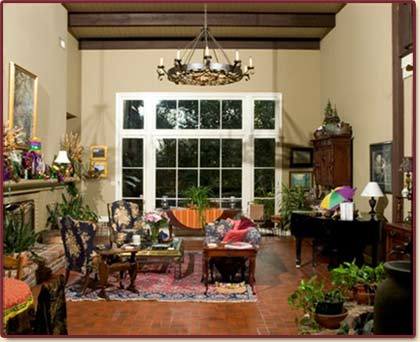 Three are also many more locations in Louisiana.  Click here to see the other Louisiana locations.

In Southern California they shoot mostly, but some examples are the Fellowship of the Sun Church scenes, the Descendants of the Glorious Dead church, Merlotte’s Bar & Grill, and Sookie’s house, just to name a few. You can also find:

And, in Southern California, they shot the the trial scene in a real-life junkyard named Aadlen Bros. Auto Wrecking, in Sun Valley, CA. Sun Valley is a small city located in the northeast corner of L.A.’s San Fernando Valley, between North Hollywood (on the south) and the Hanson Dam area (on the north). The odd, box-like cubicles seen in the background of the trial scene are real, located just inside the fence off Tuxford. Here is an aerial photo of the yard (with those cubicles marked), and here’s a map link.

Believe it or not, Aadlen Bros has been used many times before as a filming location. Previous shoots at this 26-acre wrecking yard include movies such as “The Running Man”, “Deep Impact” and “Escape from L.A.”, plus TV shows such as “The A-Team”, “Tales From the Crypt” and “Beverly Hills 90210”. They’ve even shot music videos here, including Sheryl Crow’s Sweet Child of Mine and Usher’s You Make Me Wanna. (They even have their own website, at www.aadlenbros.com.) (It’s also about two miles south of another auto salvage yard where they filmed a scene from “Dexter”.) (To the uninitiated, a junkyard might seem to be an odd choice for a filming location, but the more you learn about L.A., the more you realize that the entire city is just one big backstage for the film industry.) 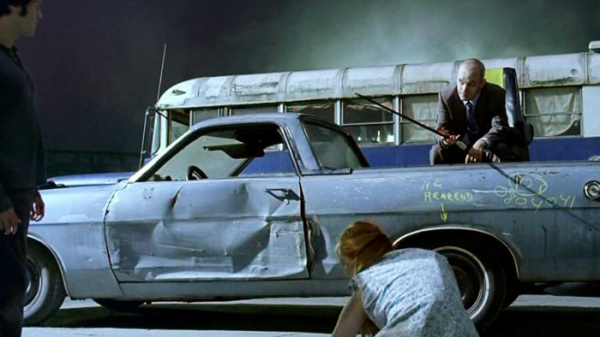 Maryann’s House, many episodes in Season 2

The home is located in Pasadena, CA. It’s about two miles east of the famous Huntington Library & Gardens (in San Marino), and about a mile and a half west of the Santa Anita Race Course and the L.A. Arboretum. (All three of those places have been used extensively for filming, over the years.) The producers also used the back yard, the pool, the patio, the interior of the house and even the same furniture (e.g. the bed Tara wakes up in the next morning.) There are lots of other photos of the house at this site. 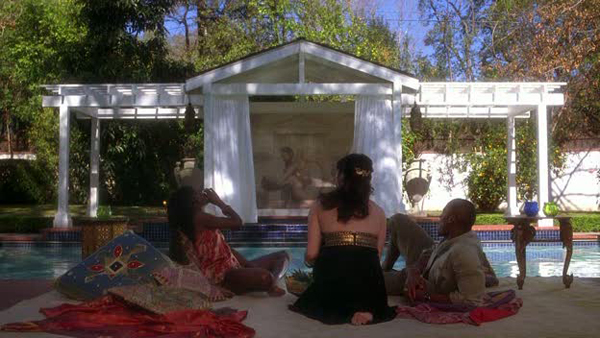 Also, there are several articles that we have done here at The Vault that include photos of set designs on True Blood. To see them, click here.