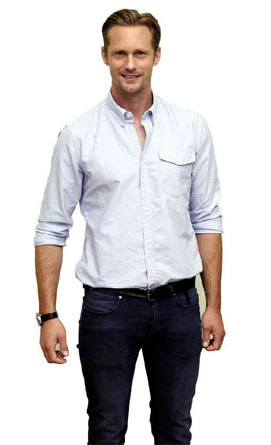 True Blood has certainly been good to Alexander Skarsgård and his fans are grateful and hope he will be on the show until the end.

In a recent interview with Inquirer Entertainment, Alex is quoted as saying:

“Professionally, ‘True Blood’ changed things a lot for me,” he declared. “Before ‘True Blood,’ I did theater and movies. There was a level of uncertainty. You finish a job and then you’re like, ‘Uh oh, how am I going to pay my bills next month?’ What’s been great about ‘True Blood’ is … a lot of things. One of them is that it has given me security, financially, to do whatever I want creatively. It’s a lovely feeling, like last fall, when I did ‘The East,’ ‘Disconnect’ and ‘What Maisie Knew.’ All three were pretty small independent films.”

In the interview, Alex discusses True Blood’s Season 6 and makes me feel a little better for Eric’s future in the series:

“There’s a new… oh God, I’ve got to be careful here,” Alexander Skarsgård caught himself as he answered a question on what direction his vampire character Eric in is headed. But the actor revealed the “new” development in his 1,000-year-old fanged Viking sheriff’s life, anyway.

“Someone is introduced, a new character, into Eric’s life,” dished the 36-year-old Swede. A possible love interest? “Maybe, maybe not,” Alexander teased in this recent interview. “But there’s someone new who’s suddenly part of his inner circle.”

On the huge buzz that his beloved character will be killed in the sixth season, Alexander jested, “I’m right here!”

“We’re wrapping up. We’re now [doing] the last two episodes of the season. I’m obviously not going to reveal what happens in those last two episodes but Eric has been busy this year because, up until now, the humans have been blood bags. Eric doesn’t really care about humans and they can’t really do anything. But this season, for the first time in a millennium, the humans can actually fight back. The governor of Louisiana has figured out a way to be a real threat and fight back. So it’s tough for Eric. It’s not as easy as it was before, dealing with the humans.”

Later on in the interview, Alex discusses the purchase of his home in LA and the three films he made last year which you can read by going to: entertainment.inquirer.net