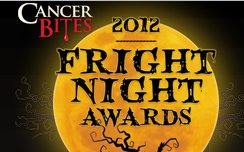 True Blood is nominated for a Fright Night Award.  The awards are dedicated to Halloween and the entertainment world to help raise awareness and educates people about blood cancer.

The campaign, Cancer Bites, announced on Monday the nominees for the first annual 2012 Fright Night Awards, featuring categories such as “favorite scary movie of the year” and “favorite supernatural TV show.”  Not surprisingly, Twilight, True Blood and The Vampire Diaries are all well-represented on the nominees list.

Fans can vote for their favorites at FrightNightAwards.com.  The winners will be announced on Oct. 30, the day before Halloween.  The awards show will be streamed online.

The Fright Night Awards is a virtual awards show held exclusively online. Winners will be announced on Tuesday, October 30. Fans can vote for their favorites at www.frightnightawards.com.

CANCER BITES has enlisted the Leukemia & Lymphoma Society (LLS), Lymphoma Research Foundation (LRF) and the Multiple Myeloma Research Foundation (MMRF) to help fuel its mission. As the nation’s leading blood cancer patient advocacy organizations, LLS, LRF and MMRF will play an integral role in the campaign at every level: funding research to find effective new treatments and cures; connecting patients and their families to free educational information; and providing support services for patients at every stage of their cancer journey. The awareness campaign will encourage the public to support their efforts to beat cancer.

Despite the fact that every four minutes someone will be diagnosed with a blood cancer and that collectively blood cancers make up the fourth most common cancer type overall, blood cancer lags far behind other cancer education initiatives on the public awareness scale. Cancer Bites is aiming to change that.

Harnessing the Halloween season and the public’s obsession around the mystique of vampires and the supernatural, Cancer Bites has assembled a powerful team of partners, experts and spokespeople to educate the public about the prevalence of blood cancers. Cancer Bites will focus on raising awareness around those most impacted by the disease and creating a broad national dialogue on the importance of funding life-saving research. Robert Pattinson introduced the concept at the 2011 Teen Choice Awards in his acceptance speech for his “Choice Celebrity Vampire” win by saying “Cancer Bites!”

For Cancer Bites and the Fright Night Awards, blood cancer survivor and creator/co-executive producer of the FOX Teen Choice Awards, Michael Burg saw a unique opportunity to raise awareness for blood cancer programs and generate broad national dialogue. “Bringing a touch of entertainment and fun together during a time that celebrates Halloween is really rewarding,” said Burg. “Our ultimate goal is to rally the public to increase overall awareness of blood cancers.”

The following are the categories where True Blood is mentioned:

In addition to voting for their favorite “Fright Night” nominees, fans can show their support by spreading the word about Cancer Bites and blood cancer awareness. The official Cancer Bites website, www.cancerbites.tv will launch on Halloween. In the meantime, voters are encouraged to spread the word via their social networks to encourage friends and family to vote and to log on to get the latest updates about the campaign, blood cancers and of course, their favorite supernatural celebrities. Fans are encouraged to join the “Cancer Bites” community on Facebook and Twitter.

So, get on over and place your vote for True Blood and the actors nominated by going to: frightnightawards.com