The True Blood production team is filming some of Season 3 on location and this year, they were in Natchez, MS at Longwood all day Monday and into the early morning hours of today, according to an article in The Natchez Democrat …

Longwood is owned by the Pilgrimage Garden Club and completed Spring Pilgrimage tours this weekend. 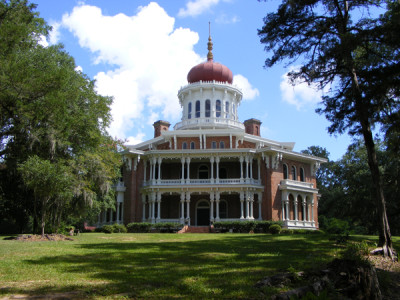 Natchez got lucky in snagging the crew, said local Ed Godfrey, who scouted and managed the location for the filming company as a volunteer. “They decided the series could go for a while, so they started buying set products to sell when the series ended,” Godfrey said. “The man who used to be with the Louisiana film commission is a Natchez native, and he got them up here antiques shopping.”

Once the production team arrived, Godfrey said it was only a matter of time before they wanted to use Natchez for filming.

“I always say, if you can get people to Natchez they will love it every time,” Godfrey said. “The production manager took one look at Longwood and said she wanted (the historic house) in next year’s series.”

Godfrey said the sets featured in a couple of HBO’s series have become celebrities in themselves.

“For instance, even though the series ended several years ago, there are tours in New Jersey for ‘The Sopranos,’” Godfrey said. “The same thing is in New York for ‘Sex and City.’”

Once people fall in love with a TV series, they want to go where something has been shot, Godfrey said, and he hopes the same will happen with “True Blood.”

“It will without question generate tourism for Natchez,” Godfrey said. “This is the first time that Longwood has been used in any type of film production.”

It is Godfrey’s hope that Mississippi will start having the same luck at attracting film crews as Louisiana, with a little help from attractive filming tax incentives.

“Film production is big business,” he said. “By time they leave, they will have purchased 300 to 400 hotel nights.”

Godfrey said he hoped Natchez would be filming friendly and that the team would come back for a subsequent series or episode.

The production crew would not comment on their work in Natchez.

The series is filming its third season, which will begin airing at 9 p.m. June 13.