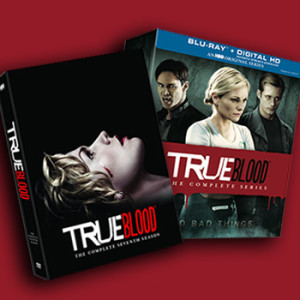 In celebration of the release of the final season of True Blood and the complete True Blood series on DVD and Blu-Ray, we have been sent some videos to share with you.

This first one if a video from the Bloody Bill character who we posted about a couple of weeks ago. In this time lapse video we get to see how the model portraying Bill was made up.

The following videos are DVD/Blu-Ray extras that were sent to us to post.  Some have already been in previous posts, but we thought it nice to add them as a group to this posting.

Bonus features for True Blood: The Complete Seventh Season include all of the exciting content True Blood fans have come to expect, while taking a special focus on the final days on set as cast and crew say farewell to the show:

Blu-ray Features (along with all DVD extras):

About True Blood: The Complete Series
Thanks to a Japanese scientist’s invention of synthetic blood, vampires have progressed from legendary monsters to fellow citizens overnight. And while humans have been safely removed from the menu, many remain apprehensive about these creatures “coming out of the coffin.” In the small Louisiana town of Bon Temps, local waitress Sookie Stackhouse (Anna Paquin) is open-minded about the integration of vampires – particularly when it comes to Bill Compton (Stephen Moyer), a handsome 173-year old living up the road. But at the service of Bill’s less virtuous vampire associates, Sookie is drawn into a series of catastrophes that will put their love to the test.

About True Blood: The Complete Seventh Season
This year, a season-opening battle between raging Hep-Vamps and their Bon Temps prey sets the stage for a season-long series of hair-raising denouements for Sookie, Bill, Eric (Alexander Skarsgård), Jason (Ryan Kwanten), Sam (Sam Trammell), Alcide (Joe Manganiello), Tara (Rutina Wesley) and their human/vampire allies and adversaries. As we’ll see, some of True Blood’s most beloved figures will meet cruel fates, while others will cheat death (true and otherwise) to forge happily-ever-after relationships that will leave fans surprised and, ultimately, satisfied. What will happen to your favorite True Blood character?