EW spoke to True Blood‘s costume designer, Audrey Fisher, about Pam and Eric’s outfits in the latest True Blood episodes as well as Ginger’s fashion transition and Jessica’s party dress. They talk about their formal wear, the flashbacks to 1986, 1996, and 2006, and got the backstory on those looks as well.

The Dallas Fundraiser
Seeing as how Eric (Alexander Skarsgard) would dress Pam (Kristin Bauer van Straten) in a purple sequin gown that Pam would joke makes her look like a “republic-nt,” and Pam would get even more joy out of dressing Eric up as the perfect Texan businessman, Fisher had one focus:

“Try to get costumes that definitely were a big wink, but that weren’t too comical,” she says.

For Eric, she custom-made a traditional Western-style suit: 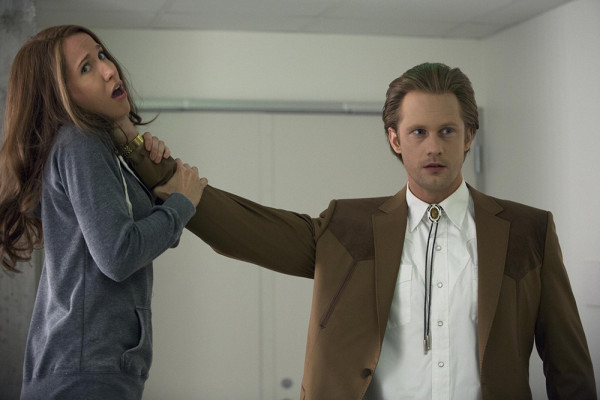 “I had to make at least doubles of it, maybe even triples. I sketched it up. We found a great fabric that we could get enough of, because he’s a tall man—it’s a lot of yardage, more than just the average suit. And a wonderful tailor in Koreatown whipped up these beautiful suits that fit like a glove and have really beautiful Western detailing. We topped it off with not a 10-gallon hat—that would be too comical—but a really beautiful Western hat.”

The writer of the episode, Craig Chester, had penned Pam’s purple sequin gown into the script.“I thought, ‘Wow, okay, great.’ The gown is very over-the-top, but Pam is making a statement—she’s definitely the prettiest girl in the room. But then my challenge was to find a purple sequin republic-nt gown that I could get like four of,” Fisher says. Without time to build it, she went on a hunt in downtown L.A. and found the La Femme dress. 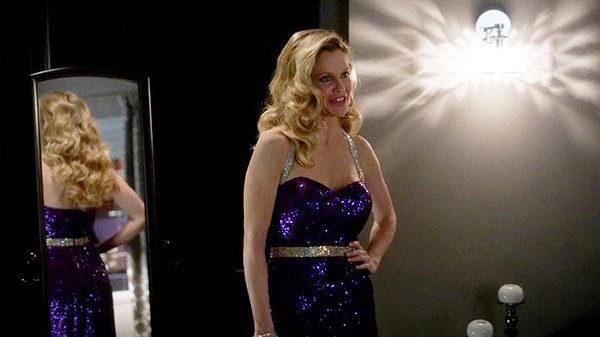 “It started out as a long gown, and I had to shorten it because it just looked too prom-y. I added a little bolero to kind of make it a little more lady-like. And then, of course, hair and makeup had a ball,” she says. “So his outfit I got to custom make, and her outfit I had to piece together a little more. That’s pretty typical of True Blood. Sometimes I’m able to make it from soup to nuts, and other times, I have to use all my wits to figure out a way to pull it off in 48 hours.”

Another fun fact about the gala attire: Sarah Newlin’s mother (played by Bess Armstrong) was originally going to wear red, a strong color like those that Laura Bush wears, but they needed to be able to show blood when she gets shot. Once Armstrong slipped into the pale pink suit, Fisher knew it was perfect: “It was just so ‘pretty evil.’” 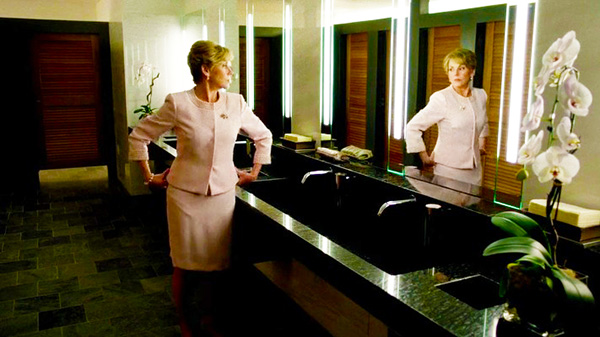 “I couldn’t do a totally over-the-top ’80s silhouette in the middle of a vineyard, because that would look comical,” Fisher says. For Eric, her first thought was Armani. “It was Richard Gere in American Gigolo—beautiful linen shirts, worn mostly open,” she says, laughing. “Youthful, tight little ’80s slacks with pleats. I tried to find it at a lesser price point, because of course, True Blood is always on a budget. But, eventually I had to just go for the gusto, and Armani is what he wound up in. It also became a little more complicated because at the last minute, we needed doubles, because he falls down in the dirt, and the dirt was wet, it gets on the knees, and you need to be able to go back to clean.” 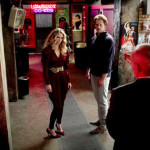 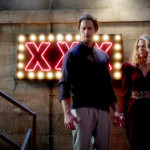 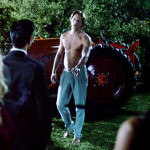 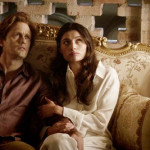 1996
Actress Tara Buck, who plays Ginger, told us Eric looked very Jason Priestley in this flashback, and he was, in fact, Fisher’s inspiration. “It was Jason Priestley, all the way, 90210. There was this one image I found: It’s very iconic. It’s him with Shannen Doherty, and he’s wearing this oversized tan, washed silk shirt over a black slinky T-shirt with a really ridiculous silver pendant necklace, and then of course, just 501s—dad pants and a giant ’90s belt,” she says.

“So I just kinda riffed on that, and once again with the writer [of the episode, Daniel Kenneth], he really wanted him to be casual and sexy, like what the ladies of Shreveport would find super hot. With Shreveport, you always take a step back, because they’re a little bit behind what would have been in New York or Hollywood. But then again, Eric maybe was more on the edge than most. So I had to take all that into account, and it seemed like the best casual hot male look.”

Hearing fans’ concern about covering Eric’s heavage, Fisher admits they did consider a look baring more, but it felt too much like contemporary Eric. “We wanted to definitely change it up and really show the time difference,” she says. “And Alex is such a gas, because he loves it when he gets to go to an extreme with a costume. He milks it. He goes crazy for that stuff.”

Once they settled on a 90210 look for Eric, Fisher did the same with Pam, searching for a rayon jumpsuit that she found at Jet Rag in Los Angeles, one of her favorite resources.

“That was just a hunt, because finding ’90s rayon is hard, and those jumpsuits are so specific,” she says. “The top is like a really hideous pattern that’s yellow, and green, and red, and the bottom is pleated wide pants.” 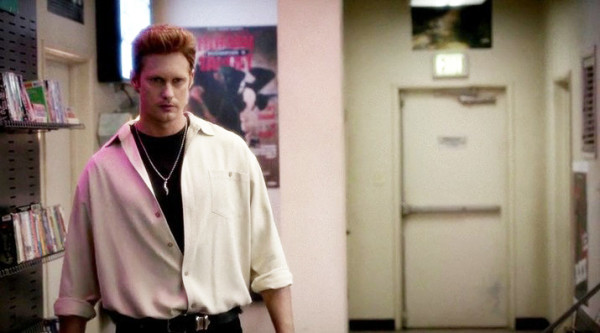 As for Ginger’s look when she meets Eric and Pam at the video store, it’s a bit Reality Bites, but mostly straight up Rayanne from My So-Called Life, Fisher says.

“And also, full disclosure, she was wearing some of my ’90s jewelry, like that was my ‘Silence = Death’ pin. I think she was wearing my earrings. I’m just one of those crazy people who’s kept all of my jewelry forever, so I was able to pull out, like, a yin-yang earring on one side, and I think it was a long skeleton on the other side. So it was just very familiar. And we found one of those hilarious stretchy necklaces online.”

2006
While Ginger was easy—Goth and a hint of Fangtasia to come–finding Pam’s look was difficult. It couldn’t be too contemporary, or too glamorous because Pam and Eric are trying to blend in. “I actually found a Versace ad that Demi Moore was in, and I knocked that off,” Fisher says. “It was a sheer black shirt and high-waisted, really wide bootcut jeans, some strappy high-heel sandals, a chain belt, and a really simple black bra.” 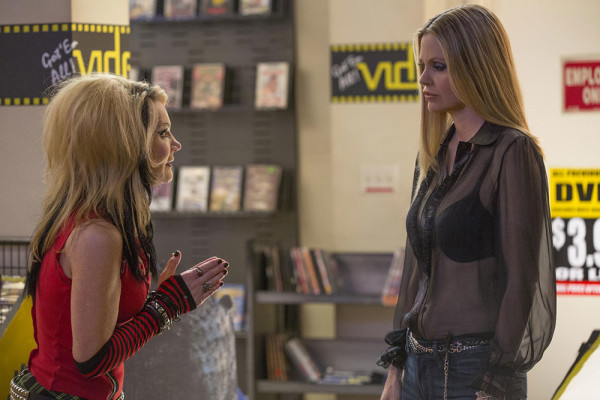 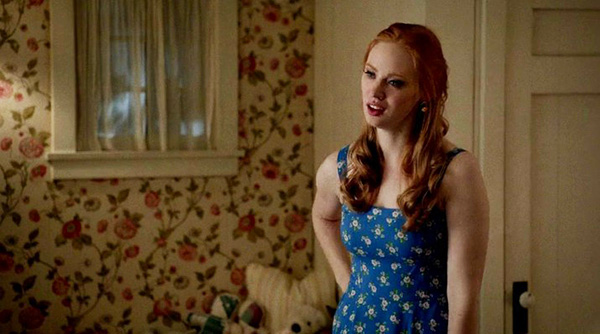 For Jessica’s breakup with James and, more importantly, her surprise makeup sex with Jason, Fisher didn’t want Deborah Ann Woll wearing something too overtly sexy—both to match the mood of the scene and for what the flowered blue dress ultimately chosen represents. “Remember when she used to dress more like Sookie, a little more country. Now she’s become more into her vamp style. We wanted to dial it back a little bit, so that it would go back to that early Jessica-Jason romance, where he’s attracted to that country girl part of her,” Fisher says. “It worked with the sadness of the scene, rolling into the sensuality that unfolds.”

Speaking generally, more thought goes into dressing for sex scenes than you may think. “I really do have to design the look around the sex scene and what has to happen,” Fisher says. “And then of course, I work with the actress and the actor to figure out how they’re gonna get it off of her. Usually, I have to add details like a zipper down the back or functional buttons down the front to help them. Because otherwise, it’s just too awkward.”

She also works on the undergarments a lot, choosing the bra and panties to match the tone of the scene—and the nudity clause in the actress’s contract. “Whether it’s a full-back panty, or a thong, how sheer it is—it’s funny, all that goes into figuring that stuff out,” she says. “And with the bra, how much padding does it have? If it’s gonna come off, you can’t do too much padding because you don’t want to oversell the goods. You have to think about that, too. If it’s sheer, is it okay to show the nipple? When you get into these scenes, the mechanics of the clothing becomes very important and legally important, because it depends on what the actress is willing to show the camera.”