Mad Men style TV campaign from “Turn” highlights evolution of advertising. A commercial broadcast in the US during the season finale of Mad Men, aimed to illustrate how much advertising has changed since the era the the show was set in.  The adversiting campaign brings to life how rapidly advertising is changing

Click on the image below to watch the commercial presented during Mad Men. 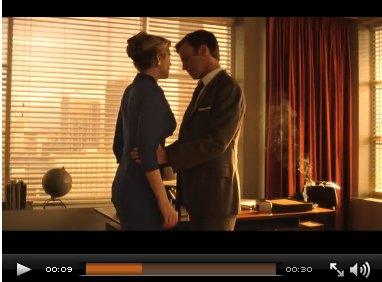 The advert from cloud marketing platform Turn, and created by gyro, was titled ‘The Moment of Decision’ which was directed by True Blood’s Michael Lehmann is set in a 1960’s Madison Avenue agency.  The spot was created to act as a graphic illustration of multi-platform advertising.

Steffan Postaer, gyro San Francisco executive creative director, said: “There is a burning cigarette in this commercial, a couple makes love, a weapon is fired, none of those things happen in commercials, but they happen in this one. It’s a game changer.”