Sean Harry’s Starfury events has been running conventions for 16 years now, and his Vampire show convention was back for it’s 4th annual event. True Blood guests this year were Michael McMillian who plays the Reverend Steve Newlin and newly turned Vampire. Denis O’Hare was originally billed to be appearing too, but had to cancel due to acting commitments on American Horror Story. He was replaced with a few days to go by Jim Parrack who plays Hoyt Foddenbury.

I had met Jim before at another convention and he was a great guest so was happy with him to be replacing Denis. I was also looking forward to meeting Michael for the first time. 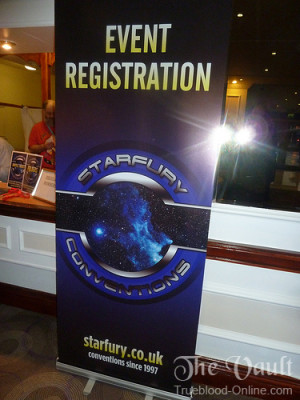 It was return to the Thistle Hotel at Heathrow for this years convention, a venue used for the Vampire Ball two years previously so I was familiar with the location and layout of the hotel. The con rate for the hotel was a very reasonable £60 a night for a twin/double without breakfast. And a regular ticket for the convention cost £90 making this a very affordable convention to attend. I arrived early this year and was looking forward to meeting fellow Truebie friends and catching up. 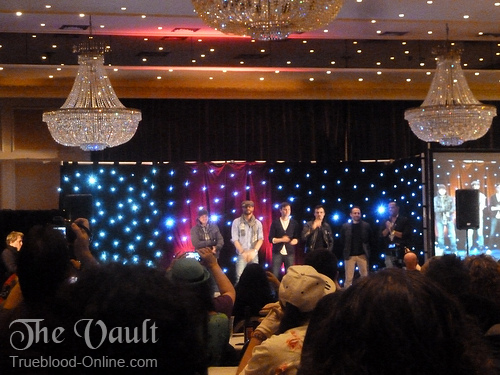 The opening ceremony was in the main convention hall which was laid out with big round tables seating 20 odd people to a table so we all sat together for it. Sean Harry introduced the guests in turn and told us that Jim Parrack would be arriving the following morning on the red eye. 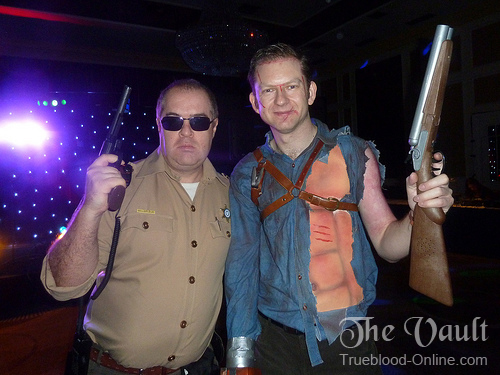 The meet and greet for Gold Ticket holders followed this and then it was the first themed party of the weekend, Movie Maniacs. There were some great cosplays on the dance floor, including one of my favourites, Ash from the Evil Dead. I work my Sheriff Andy Bellefleur costume for this party. The party went on until 2am, as it did for every night of the convention. Talks the following day were scheduled to start at midday, so this worked well with the late night party the night before. Vampire Ball is known for it’s laid back atmosphere which the guests enjoy and mingle more with the attendees at the parties because of this. Guests were dancing on the dance floor and chatting to people outside for a good portion of the evening. 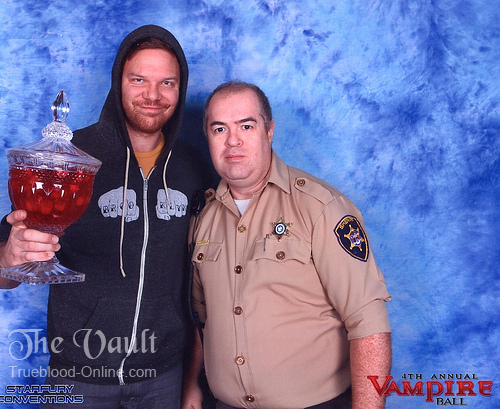 Saturday saw a 2pm photo shoot with Michael and Jim. I wore my Sheriff’s outfit for this photo shoot along with Talbot, a crystal urn prop filled with jelly to look like Russell Edgington’s spiked Vampire lover. Michael commented on what a great prop Talbot was which was nice of him. 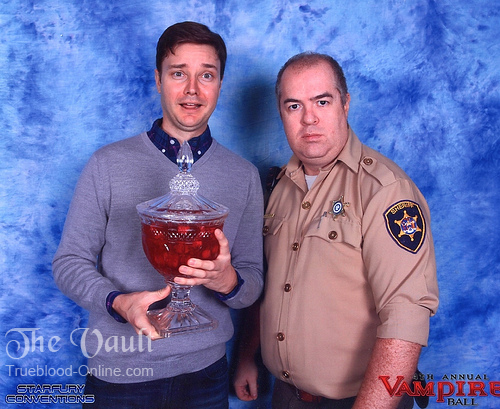 The first of two talks featuring Michael and Jim was after this. Jim talked about his directing work and his method as an actor. Michael spoke about his comic book work as well as that of his part as the Reverend Steve Newlin. 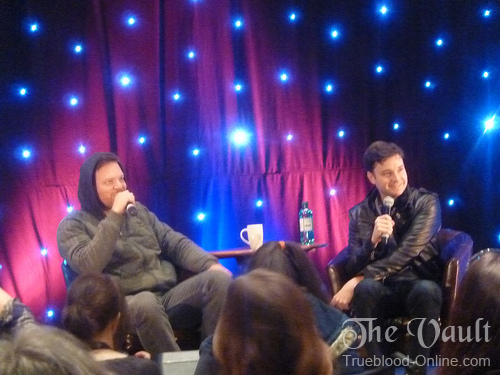 The autograph session for Gold Ticker holders was at 5pm and some Regular ticket holders were allowed in after this so I decided to get my autographs then. I have a fake arm cast with signatures from a dozen odd True Blood actors on it so I got Michael and Jim to sign that. 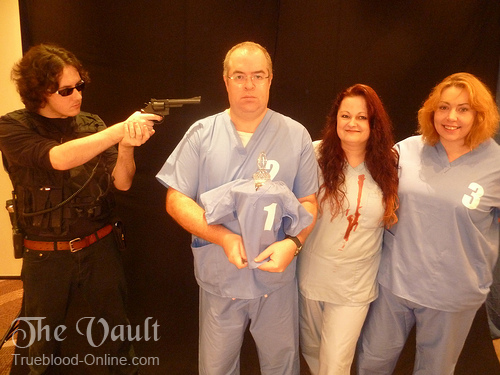 The cosplay parade was the first event of the evening followed by a gig by Christian Kane. We entered the cosplay parade as Vamp Camp, from Season 6 of True Blood. Three of us wore blue scrub with the numbers 1-4 on them and we were guarded by a guard in body armour. Talbot even had a little blue scrub outfit of his own. It was great fun to take part!
The evening party was the Vampire Ball with some people going in Masquerade with masks on. One of our friends had a birthday surprise cake and we all ate this along with the jelly from Talbot, which has become a bit of a tradition at conventions now.

The party went on late into the night again and everyone had a great time. 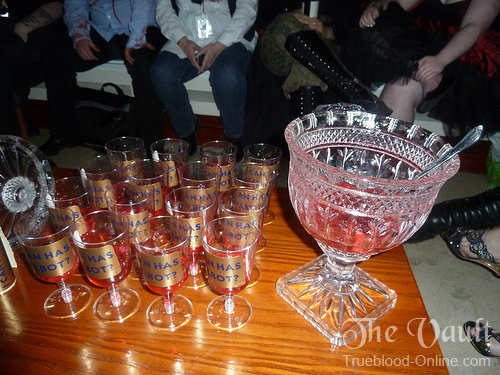 The next morning we were all meeting at 10am for a photo shoot with Michael in our blue scrubs from Vamp Camp. He thought it was great and came out to talk with use afterwards after the photos had been printed and he could take a look. 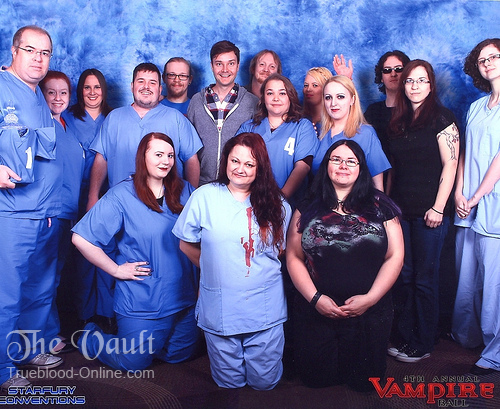 The afternoon saw another talk from Michael and Jim with some more behind the scenes stories from the set of True Blood. The closing ceremony was packed and we managed to get a table towards the front for this. The guests all said they had a great time and there was a birthday cake brought out for Sean for the 16th birthday of Starfury. The party went on late once more and Jim Parrack spoke to some of my Truebie friends for a good portion of the night. 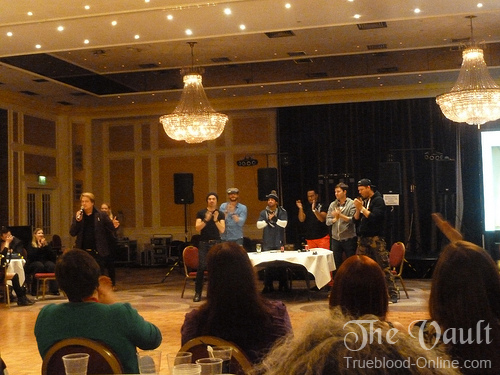 Another great con from Starfury. Next years event is September 26-28 at the Birmingham Hilton Metropole. Janina Gavankar (Sam’s shapeshifting girlfriend Luna) has already been announced as a guest.

Looking forward to see who else from True Blood will be announced!

Note: You may also recognize the ladies from the Great Northern True Blood Pilgrimage in some of the photos below.

I'm a true blood fan who is a big fan of conventions featuring actors from the show and love cosplaying as characters like Andy Bellefleur and Vampire Eddie.

I'm a true blood fan who is a big fan of conventions featuring actors from the show and love cosplaying as characters like Andy Bellefleur and Vampire Eddie.