On Sunday night, October 27, 2013 I attended The Amanda Foundation’s annual Bow Wow Beverly Hills Halloween event. This year the title of the event was The Big “BARK” Theory because the event host was Kaley Cuoco who plays Penny on the show, “The Big Bang Theory.”

It was held at the same prime location as in the past at 2 Rodeo Drive in Beverly Hills. Teri Austin and Tracy Jones put on a great event for all the many animal lovers who attended. Pets, of course, were welcome and some were even dressed up  for the annual Halloween costume party. It was a fun time that also included silent auctions, great food, drink and music for all.

I arrived in time to watch Kaley Cuoco receive the “Worthy of Love” award from the head of the Amanda Foundation, Teri Austin.  Teri also spoke about a doberman who desperately needed an operation on his leg and she asked for attendees to donate for that operation.  I’m happy to report that our furry friend will be having the needed operation as many who were in the audience stepped up to contribute. 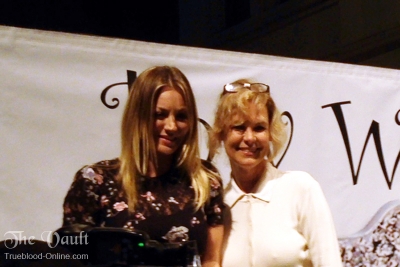 Many celebrities attended to show their support for The Amanda Foundaiton in addition to Kaley Cuoco, such as Melanie Griffith, Jade Tailor, Glenn Hughes, Abri van Straten, who came with his wife, True Blood’s Kristin Bauer van Straten. 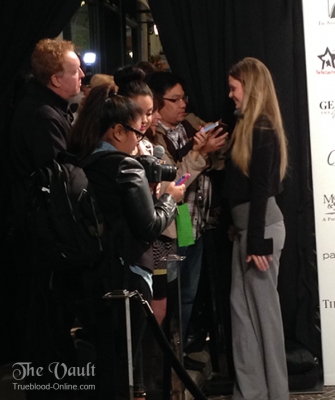 Kristin being interviewed by the press.

Kristin arrived later than most as she had just come from another charity event.  She told me she had also just flown back from Tulsa, OK earlier that day where she had appeared at a Halloween event on Saturday night.  She sure is a busy lady.

However, that didn’t keep her from being very friendly and generous with her time to all.  She posed for the photographers and then gave interviews to all those that wanted one. Kristin is such a caring and genuinely giving person, I wasn’t surprised a bit.

Lucky me, got to “hang out” with Kristin and Abri for a bit and I asked her if she knew anything about True Blood Season 7  and when it would be starting production? Just like all the other cast members I’ve asked, she said she knew nothing and that she hadn’t heard a thing from HBO yet about a start date.  She did say that she expects production will start up in early January, as has been reported. I chatted with her and Abri for a while and they told me that they are about to leave for a vacation in Tahiti.  I’m sure this is well deserved as Kristin has been very busy making lots of public appearances during True Blood’s hiatus, so I wished them the best for a wonderful holiday. 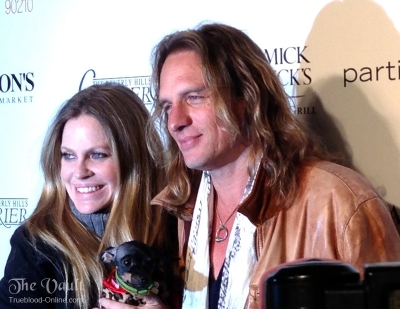 Below are some of the photos I took at the event.

Below are three videos from the event.

The first is one I took amidst the crowd of photographers of Kaley Cuoco getting her “Worthy of Love” Award, (sorry about the shaking; it was very crowded).

The next two are of the photographers shooting photos of Kaley and Kaley on the red carpet:

Kaley Cuoco on the red carpet

Please consider supporting The Amanda Foundation by donating to save the life of a god or cat.

You can make a direct donation to The Amanda Foundation here :