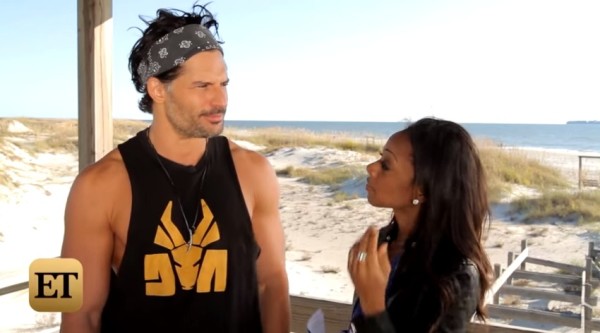 The fellas have planned to make sure you leave the movie theater sat-is-fied. ET’s Nischelle Turner visited the set of the highly anticipated summer sequel to find out just how hot it’s going to get.

“This [sequel] is going to sneak up on everyone,” Joe Manganiello told ET. “We’ve kind of gone to the next level. When you thought it couldn’t go anywhere further, we take it there.” He adds, “People are not going to be prepared for this movie.”

Manganiello reprises his role as Big Dick Richie in the sequel, out July 1. And while he revealed that he ran some moves by fiancé Sofia Vergara, when asked whether she returned the favor, Manganiello admitted that the sultry Colombian taught him a few moves herself. “The Colombian people love life,” he said. “They dance, they live life to the fullest.”

The Magic Mike sequel picks up three years after Mike (Channing Tatum) bowed out of the stripper life. The remaining Kings of Tampa (Manganiello, Matt Bomer, Kevin Nash and Adam Rodriguez) are ready to follow suit, but not before they hit the road for a handful of blow-out performances. They pick up the legendary Magic Mike as well as some new moves along the way.

“We’re all killing ourselves diet wise and that’s not to be sexy on stage,” Tatum, who also co-wrote and produced the film, explained. “That’s to be sure you don’t look fat. And it’s misery. Misery loves company and we’re all sort of looking at each other like, ‘One more week, one more week, and then we can have carbs again.'”