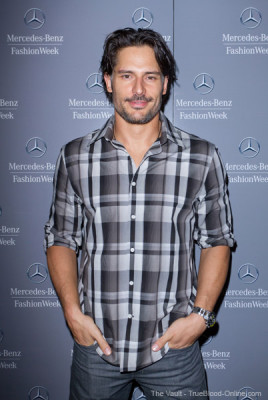 True Blood’s construction worker and werewolf, Joe Manganiello, doesn’t seem like the kind of guy to frequent fashion shows. In fact he describes his personal style as designer lumberjack. However, he did take in the Perry Ellis men’s show Monday night, September 12, 2011 at Lincoln Center.

Joe is close to signing on to play a male stripper in an upcoming Steven Soderbergh movie, “Magic Mike” and he was coy about discussing it, acknowledging that “there are a lot of rumors floating around,” but saying only that he was on the verge of inking a deal to be part of an ensemble cast. He was more forthcoming about his recently wrapped romantic comedy “What to Expect When You’re Expecting,” with Jennifer Lopez, Cameron Diaz and others. “It was a blast,” he said, noting that he especially enjoyed hanging out with comedian Chris Rock on the Atlanta set. “We were just cranking each other up,” he said.

Manganiello, who was dressed in Perry Ellis, said despite his size and muscular build, he doesn’t have trouble buying clothes. “It’s not really that big,” he said. “It’s deceptive. My sizes are pretty normal. It’s just that there are a lot of little girls on ‘True Blood’ and it makes me look humongous.”

In the video below Joe is interviewed by Rocco froim Fashion News Live.