Video from Joe Manganiello to the Palm Beach Film Fest 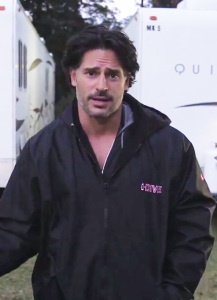 True Blood’s Joe Manganiello did not attend the gala for The Palm Beach International Film Festival, celebrating its 20th anniversary Saturday night as originally reported. Unfortunately, he had to pull out of his scheduled appearance, due to a “unforeseen production delay” on his current movie Magic Mike XXL, which is shooting in nearby Georgia.

Manganiello did, however, tape his acceptance speech for his career achievement award. In the video shown to cheer up crestfallen guests, Mangianello apologized and explained that he didn’t get to finish his scene with Andie MacDowell even though they shot until 5 a.m. Halloween night. He also gets some ribbing from his costars, including CSI: Miami’s Adam Rodriguez.

Watch the video below: