‘War on Everyone’ to star Alexander Skarsgård

The new film, “War On Everyone” is to star True Blood’s Alexander Skarsgård in the role of Terry Monroe. The film is the follow-up to the acclaimed drama, “Calvary,” which starred Brendan Gleesan. It is currently filming in Albuquerque.

Below is the first still from the film that includes Alexander Skarsgård sending a message to the camera with his middle finger while co-star Michael Pena casually looks on. 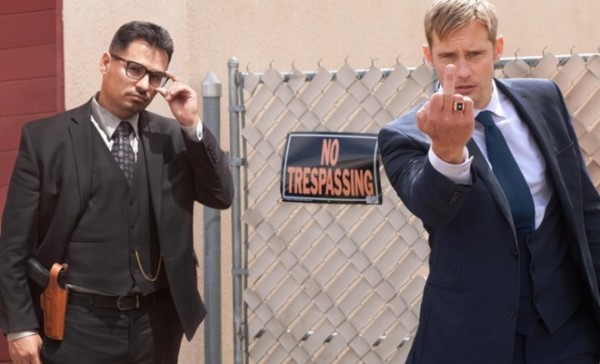 The story is about two corrupt cops in New Mexico who set out to blackmail and frame every criminal unfortunate enough to cross their path. Things take a sinister turn, however, when they try to intimidate someone who is more dangerous than they are. Or is he?

It gives me great pleasure to declare ‘War on Everyone’ with my fellow combatants, Michael Peña and Alexander Skarsgård,” McDonagh said. “We look forward to the battles ahead, and we will go on with a spirit that fears nothing. That’s Homer, by the way.”

According to the New Mexico Film Office, “War on Everyone” will film in and around Albuquerque, from early April until mid-May 2015.

Production will the move to Reykjavik, Iceland, for its final week of filming.

The film also stars, Tessa Thompson, Caleb Landry Jones, Paul Reiser, Stephanie Sigman and David Wilmot.  No release date has been announced as of yet.