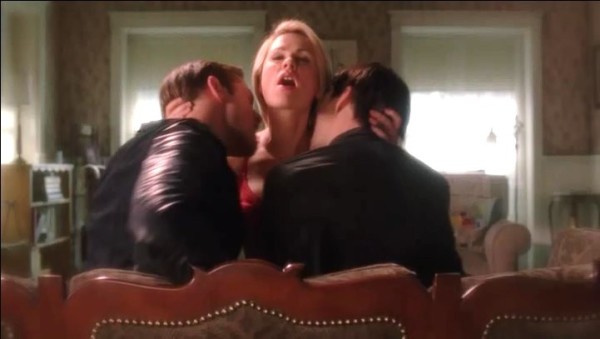 So, the simple answer is that the content just is, literally, sexy. But then again, so are a million other books, films, and shows, and none of them causes the displays of sexual and romantic fandom we tend to see with regard to vampire fiction.

But why exactly is romance with a vampire considered so much sexier than anything else, by so many people? Here are a few possible explanations.

Regular attraction occurs in just about every piece of fiction. But obsessive attraction is a common aspect of vampire stories that makes for a more intriguing erotic premise. Consider this blurb describing an adult film based on Twilight: New Moon: “As the uncontrollable urge for sex consumes her in the absence of her vampire lover, she desperately searches to fill her lustful desires….” Granted, this is literally a description for erotica… but does it seem that far off from what an honest description of a female protagonist in a True Blood or Twilight may look like? These characters don’t just fall for each other; they get into deep, needy bonds that make for explosive sexual tension, and that draws an audience.

Depending on the specific story, there can be other explanations as well. Sometimes, there’s an element of fear that helps to heighten sex appeal; sometimes authority plays a role. But whatever the case, it’s the deep intimacy and forbidden nature of vampire romance that make these stories so consistently exciting from a sexual perspective.