Who will get the True Death in True Blood Season 6?

Rumors have been running rapid lately, rumors of one of our beloved characters getting the final stake. Yes we all know by now that True Blood is filled with shocking deaths, but it still hurts to know in advance that we will be losing one of our main characters so quickly this season. With only ten short episodes we are left asking ourselves, who will it be?

Who will die and who will be safe? Well I am here to give a rundown on the pros and cons for each character (besides Sookie) and to try and foresee who may or may not die. Let’s get started! 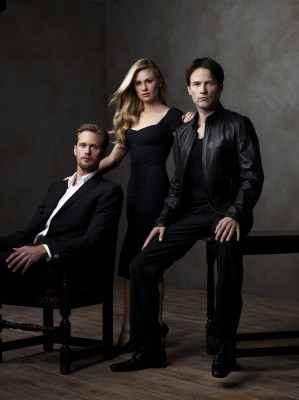 10. Eric Northman- Now I know some of the main rumors going around are that our lovable Viking may be the one to get the True Death, but I want everyone to take a collective sigh of relief for I am almost a hundred percent sure that this is false. I cannot confirm anything, for this is purely my opinion, but photos have been taken recently of Alex (Eric) shooting for the final episodes of the season. Another thing for Eric is that he is a huge fan favorite plus he is still in the running for Sookie’s heart so it is doubtful he will be the one to die.

9. Bill Compton- With the new and all mighty powers he has developed since drinking the Lilith cool aid it is doubtful he will die as well. Unless they kill him and he comes back again, again, again, and again. Only time will tell what has become of Bill, or what will become of him, but it is almost certain he will not be the one to die.

8. Pamela Swynford De Beaufort- Another fan favorite, but with all the human wars and Billith business going on she may be on the hit list. Rest assured my Truebies, I doubt she is in trouble. Besides if they killed her off we would never know when to ‘get back on that pole’.

7. Jason Stackhouse- A Sookie’s biggest support system and her loving brother I do not think he will die. He could be a surprise death but fans would not be please at all and Sookie may go completely crazy, so I think he is safe…for now.

6. Sam Merlotte- With the cliffhanger leaving Luna better off dead, and Sam surviving the Authority takeover, Sam seems in the clear right now.
5. Alcide Herveaux- With his new status as pack master, and major sex symbol, doubtful he will be the one to die.

4. Jessica Hamby- The new vampire princess seems safe with Bill on her side, but she could be in major danger if she tries to protect her godly Maker.

3. Tara Thornton- Newbie vampire Tara may be in trouble. With some fan support dying for her a bit, the writers may not have a problem killing her, once and for all. It would be unlikely though since she now has a relationship with Pam and still is close to Sookie and the crew. Her death, however, would mark a surprise in the show. She has been there since the beginning and with her new “family” it may be the best time for the writers to pull the rug out from under us.

2. Arlene/Terry/Andy/Holly (The Merlottes Crew)- This group will most likely end in a death or two. Arlene, Terry, and Holly have faded from fan favor so the writers may off them, but Andy may be in the clear.

1. Lafayette Reynolds– With all the rumors running around, this is the one that seems to pop up the most and even though I, like many fans, do not want to admit it he may be the one to go. Lafayette has been a fan favorite since day one, heck his character was even written to stay on the show after his book self died, and he has developed close relationships with everyone on the show, even Eric. If he was to die it would be the biggest surprise and the biggest death in True Blood since Gran and Godric. It would hurt just about every character and it may be the shock that True Blood needs, but it still hurts to talk about. I hope I am wrong about his death, I hope it is just my number two on this list to suffer, but alas I fear the worse.

That’s my list and I’m sticking to it, until proven wrong of course. So here is to another great season of True Blood and let’s hope all of our favorite characters are safe!

Laura Dengrove is a young journalist/critic on all things film and television. Full time student and writer.

Laura Dengrove is a young journalist/critic on all things film and television. Full time student and writer.