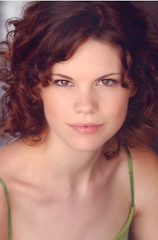 After ABC failed to pick up Devious to series, it seemed actress Mariana Klaveno would be freed from her role as the self-centered actress wife of Grant Show’s daytime soap actor character. But now that Lifetime has expressed interest in Devious (a decision is expected to be reached by week’s end before the actors’ contracts expire later this month), it’s up to Cherry whether or not to release Mariana from the role so she can play the much larger and high-profile part of ageless vampire beauty Lily, who magically materializes from a mass of spiders in Bryan’s new version for NBC.

Lily would be Mariana’s second vampire role. While the 32-year-old actress has had parts on Dexter and Hawaii Five-0, it was her devilishly delicious turn as Bill’s blood-sucking maker Lorena Krasiki on True Blood that led to her now being caught in a tug of war between Mockingbird Lane and Devious Maids. Should Mariana join Mockingbird, she’ll reside in the family’s haunted house alongside Jerry O’Connell as Herman, Eddie Izzard as Grandpa and Mason Cook as Eddie.

We hope Mariana gets the part she wants the most, but like everyone else, we’ll just have to wait and see.